Jed Dietrich, Esq. and His Team of Aggressive, Tenacious and Hardworking Rear-End Big Rig Truck and Semi Rig Truck Accident Lawyers Will Fight to Obtain the Best Result After Your Accident

In 2016, a 47-year-old man was injured after being rear-ended by a truck while traveling on the I-90 in Buffalo, New York. Jed Dietrich, Esq. fought to recover $958,427.20 for the man by establishing that the truck driver was following the vehicle too closely and was at fault for the accident.

When a 46-year-old man suffered a spinal fracture and knee injury after an accident with a tanker truck that kept him from working, Jed Dietrich, Esq. battled to obtain $700,000.00 to compensate the man for his for lost wages, damages and pain and suffering.

Jed Dietrich, Esq. was able to recover $450,000.00 for a 47-year-old man that needed cervical surgery after being in a rear-ended by a tractor-trailer when the driver blacked out and pushed his car into four other cars. 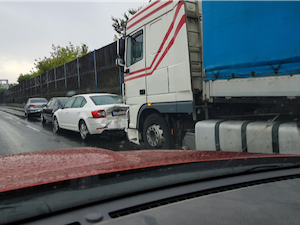 A rear-end accident with a tractor-trailer forced a 31-year-old woman to obtain left shoulder and bicep surgery. Jed Dietrich, Esq. successfully obtained $250,000.00 for the woman after four depositions and mediation.

Over the past 2 decades, Jed Dietrich, Esq. has a proven track record of winning Buffalo, New York truck accident cases for his clients.

A rear-end accident is when one vehicle collides with the back of the vehicle in front of it. This type of collision occurs frequently, especially with larger automobiles like trucks and tractor-trailers.

Trucks can weigh upwards of 80,000 pounds, whereas the average passenger vehicle is 5,000 pounds. Trucks take much longer to stop, and when traveling at high speeds, the collisions between trucks and smaller passenger vehicles can be devastating. Some common reasons that rear-end truck, big rig and semi accidents occur are:

If you have been injured in a rear-end truck accident, you need a superior truck accident attorney in Buffalo, New York that is familiar with rear-end collisions. Jed Dietrich, Esq. and his superb team of lawyers at the Dietrich Law Firm P.C. will zealously fight to obtain the best possible result for you.

In the Large Truck Crash Causation Study, the Federal Motor Carrier Safety Administration concluded that 87% of truck crashes were the fault of the driver. Of these accidents, 38% were due to decisions that the driver made.

The Federal Motor Carrier Safety Administration also stated that the most common type of truck collision is a rear-end crash, which occurs 29% of the time.

The table below illustrates the number of truck accident injuries per year in the United States:

You need a superb and top rated, Best Lawyer of America, Buffalo, New York truck accident lawyer that has extensive experience in rear-end collisions. Jed Dietrich, Esq. and his elite staff at the Dietrich Law Firm P.C.—rated also a Best Law Firm of America—have successfully settled a vast number of personal injury cases where one was injured in a rear-end crash with a truck. If you have been injured, call the Dietrich Law Firm P.C. at (716) 839-3939 today for a free consultation.

It takes the average driver 1.5 seconds to recognize a hazard on the road, and make the decision to apply the brakes. In that time period, a vehicle that is moving at 65 miles-per-hour will travel 143 feet. Once the brakes are applied, it takes a normal passenger vehicle approximately 245 feet to come to a complete stop. The average truck requires over 450 feet.

The weight and speed of large trucks makes it very difficult for drivers to respond quickly to dangerous conditions. In total, from the time that a truck driver perceives a dangerous situation to the time the vehicle stops, a truck travels close to the length of two football fields.

Additionally, there are several factors that can increase the stopping distance of a truck. These include, but are not limited to:

There are several factors that go into a personal injury case involving a rear-end tractor-trailer, big rig truck and semi truck accident. In this situation, you need a top rated and Best Law Firm of America with a proven track record of handling rear-end truck accident cases in Buffalo, New York. Jed Dietrich, Esq. is a Best Lawyer of America, and his firm is a Best Law Firm of America. The staff of lawyers and paralegals at the Dietrich Law Firm P.C is aggressive, tenacious, and hardworking. If a tractor-trailer, big rig truck or semi truck has rear-ended you, call the Dietrich Law Firm P.C. today at (716) 839-3939.

Section 1129 of the New York Vehicle and Traffic Law requires drivers to maintain a safe distance between their vehicle and the vehicle in front of them. In most cases, if a driver is aggressively tailgating you or driving recklessly, then they are liable in the event of a rear-end accident.

However, there are some circumstances where the fault in rear-end crash can be shared, or even completely on the front driver. Some examples of this include:

In these cases, the driver who has been struck can actually be held liable, in whole or in part, for the accident. The legal doctrine of comparative negligence allows a jury to allocate fault between both parties involved in the accident, which reduces the amount of damages a plaintiff can recover based upon their own percentage of fault.

For example, if Driver A slams on their brakes and crosses into a turning lane without signaling to try and make the traffic light, and Driver B hits them from behind, both drivers may be held liable. It might be determined that Driver A, who cut across the traffic lanes, was 75% responsible, and Driver B, who hit Driver A, was 25% responsible. Driver B may sue Driver A for injuries sustained as a result of the rear-end accident. If the jury awards Driver B $50,000 in damages, the award would be reduced by his percentage of fault, 25%. Driver B would be able to recover $37,500.

If you are injured in a rear-end accident with a tractor-trailer, big rig driver or semi truck driver you need a superior and top rated personal injury attorney in Buffalo, New York. Jed Dietrich, Esq. and his seasoned team of trial lawyers and paralegals understand the nuances of rear-end accident liability and will use their experience to fight to obtain the best results possible for your personal injury case. The Dietrich Law Firm P.C. is aggressive, tenacious and hardworking and is available 24 hours a day at (716) 839-3939.