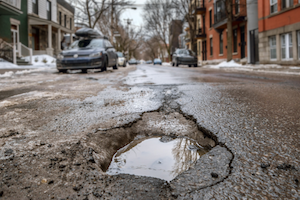 Poor road conditions are involved in approximately 33 percent of traffic related fatalities. Every year potholes cost Western New Yorkers millions of dollars in damages to their vehicles and in injury related medical expenses.

The harsh, snowy and cold winters of Western New York, followed by increasing temperatures in the spring and summer months, create the perfect recipe for potholes.

A pothole is defined as an obstruction in the roadway surface where some of the road’s material broke away, leaving a depression or hole. Potholes usually form as a result of water permeating the road’s surface through small holes and cracks. The water then expands as it freezes, in cold weather, and thaws as the temperature increases. When cars, SUVs and trucks drive over the weakened surface, the roadway breaks off into tiny pieces. As more cars continue to pass over the surface, a pothole eventually forms. Potholes can be very deep and wide when not repaired promptly.

The number of potholes on any given roadway depends on the type of pavement, with more porous pavement being more susceptible to potholes. However, potholes tend to become most evident in the spring because of the frequent freezing and thawing of the road.

The 2016 survey by AAA revealed that approximately 30 million drivers across the United States experience pothole damage serious enough to require repair to their vehicle. The cost of repairing such damages is approximately $3 billion annually. Potholes are dangerous to pedestrians, bicyclists, motorcycles, cars and trucks. If they grow large enough, potholes can badly damage your car’s alignment, tires, rims, axles and suspension.

The unexpected impact of a vehicle driving over a large pothole can cause the driver to lose control and be involved in a car accident. In cases where the pothole forces the car to swerve into oncoming traffic, causing a head-on crash, victims may suffer serious injuries or even death. Other drivers hastily veer in an attempt to avoid hitting a pothole and end up hitting another vehicle. Some car accidents result when vehicles are disabled by a pothole. After hitting a pothole, drivers often stop their cars to assess the damage. Other drivers not paying attention may hit the disabled vehicles or the driver who left the vehicle.

Potholes are extremely dangerous to motorcycles and bicycles. Hitting a pothole, especially at high speeds, can be disastrous for the rider and his or her motorcycle or bike. Often the bike or motorcycle will have rim or tire damage and an unprotected driver will be susceptible to even more serious injuries.

WERE YOU INJURED IN AN ACCIDENT CAUSED BY A POTHOLE IN BUFFALO, NIAGARA FALLS, ROCHESTER OR OTHER PARTS OF NEW YORK STATE?

Preventing Car Damage Or A Personal Injury In Buffalo and Beyond

In order to protect your vehicle and to prevent or minimize a personal injury accident, drivers should:

There are several ways to report potholes. For roads in the City of Buffalo, you can call the City directly. For potholes in Erie County, repairs that are needed can be reported online.

If hitting a pothole is completely unavoidable, before hitting it, decrease your speed as much as possible, release the brakes and keep the steering wheel straight. This will provide you with more control over your vehicle and help to minimize damage to your vehicle.

If you were injured as a result of a Buffalo, New York personal injury pothole accident, contact Jed Dietrich, Esq. and his team of top rated and elite Buffalo, New York pothole accident attorneys today at 716-839-3939. Jed Dietrich, Esq. is a Best Lawyer of America, and his team is available 24 hours per day and 7 days per week. Plus, there is never a fee unless we WIN for you.

Who Is Liable For A Buffalo Personal Injury Pothole Accident?

Although New York law allows pothole accident victims to pursue compensation from the entity or person whose negligence caused an accident, determination of pothole accident liability is often complicated. It is the responsibility of the municipality to maintain and fix roadways to make sure they do not have defects.

When a municipality knew or should have known about a pothole, yet neglected to repair it, the municipality may be held liable for any accidents resulting from that pothole. Even in situations where an accident resulted from a driver swerving to avoid a pothole, the municipality can be held responsible for the accident if the driver can successfully prove that they were forced to swerve in order to avoid a certain and foreseeable threat that the pothole bestowed. However, typically, it must be proven that the municipality or New York State had prior NOTICE of the road defect.

To recover compensation for injuries suffered, the following may need to be obtained or determined:

If possible, take pictures of the pothole and note the exact location. Filing a police report also helps to document the accident and potentially prove negligence in a Buffalo, New York personal injury case or a New York State personal injury claim.

If the damage to your vehicle occurred on a New York State road, the New York Department of Transportation refuses to reimburse drivers for pothole damage, during what it refers to as “pothole season.” From November 15th to May 1st, the cold weather makes roads more susceptible to potholes. If the incident occurred out of season, damages may possibly be obtained, but limited to $5,000.

After serious accidents, victims may suffer from life-altering injuries that make it impossible to return to work. Pothole personal injury accidents can result in death. Victims, or their family members, can pursue recovery for damages including medical treatment, pain and suffering, lost wages and future losses, through a personal injury and wrongful death lawsuit.

Practicing law the Dietrich way, we are determined, disciplined and dedicated to your cause. The Buffalo, New York personal injury lawyers at the Dietrich Law Firm P.C. understand how to properly and aggressively pursue pothole accident injury claims. We will zealously fight to obtain the best possible result for your car accident case in Buffalo, Rochester, Niagara Falls, throughout New York State and beyond. The Dietrich Legal Team will zealously battle with insurance companies, cities, towns, villages, New York State and other governmental entities, to attempt to obtain the best result for your Buffalo, New York personal injury claim. Contact us today at 716-839-3939.