Jed Dietrich, Esq. is a Buffalo, New York Serious Injury Attorney Who Represents People That Were Ejected From a Vehicle After an Accident Caused by Someone Else’s Negligence. 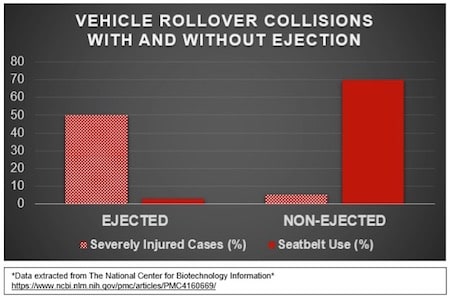 An occupant ejection is when a driver or passenger is partially or fully propelled from their vehicle during a collision. The injuries resulting from occupant ejection accidents can be life-altering and even fatal because of the great force of being thrown out of the vehicle and making contact with the ground, other vehicles or fixed objects outside of the vehicle. In rollover collisions, the mortality rate for ejected occupants is 5 times higher than other occupants.

The Dietrich Law Firm P.C. and its team of elite Buffalo, New York occupant ejection lawyers are devoted to providing the highest level of personal injury service to people who have been injured throughout Western New York. We know how difficult the time after a car, truck or SUV accident can be, and we are here to help you through this challenging time.

Jed Dietrich, Esq. has over 20 years of experience fiercely representing individuals who sustained injuries because of someone else’s negligence or recklessness. Throughout the course of his career as a Buffalo, New York personal injury lawyer, Jed Dietrich, Esq. has obtained more than $175 million in settlements and verdicts for his clients. Over 38 times insurance companies have paid Jed Dietrich, Esq. and his top rated team of lawyers $1 Million, or more, on behalf of their clients. You can trust that our firm will battle to obtain the best possible result for YOU!

If you, or someone you love, were ejected from a vehicle during a car, truck or SUV accident in Buffalo, Rochester, Niagara Falls or anywhere else in New York State, call us today at 716-839-3939 for your free consultation. Our team is available 24 hours per day and 7 days per week, and there is never a fee unless we WIN for you!

The most common injuries that vehicle occupants are likely to sustain, as a result of being ejected from a vehicle, include:

WERE YOU, OR A LOVED ONE, EJECTED FROM A CAR, TRUCK OR SUV AFTER AN ACCIDENT CAUSED BY SOMEONE ELSE’S NEGLIGENCE IN BUFFALO, NIAGARA FALLS, ROCHESTER OR OTHER PARTS OF NEW YORK STATE? CALL JED DIETRICH, ESQ. AND HIS TEAM OF OCCUPANT EJECTION CAR ACCIDENT ATTORNEYS IN BUFFALO, NEW YORK AT 716-839-3939 NOW TO OBTAIN THE HELP THAT YOU NEED!

Call Jed Dietrich, Esq., recognized as a New York Super Lawyer, and his team of Buffalo, New York car accident attorneys at 716-839-3939, to schedule your free consultation. We will discuss the details of your occupant ejection collision with you and work to get you get the compensation that you deserve.

There are a number of precautions that can be taken to avoid being thrown from your vehicle in the event of an accident. The best way to avoid being ejected, completely or partially, is by wearing a seat belt.

At the Dietrich Law Firm P.C., we provide legal representation to automobile accident victims in Buffalo, Rochester, Niagara Falls and other parts of New York State. Whether the case goes to trial or is settled to your satisfaction, our objective in every case is to make sure that you are fully and maximally compensated for your injuries and pain and suffering. Call the Dietrich Law Firm P.C., recognized as a Best Law Firm of America, today at 716-839-3939 for your free case consultation.

Who Is At Fault In Occupant Ejection Car Accidents?

Our Buffalo, New York car accident attorneys at the Dietrich Law Firm P.C. will thoroughly investigate your collision and collect evidence against the at-fault parties. We will talk to potential witnesses and work with medical professionals, forensic experts and accident reconstruction experts to collect all the data we need to build the strongest case possible.

If you, or a loved one, were the victim of an occupant ejection accident through no fault of your own, contact Jed Dietrich, Esq., recognized as a Best Lawyer of America, and his team of highly experienced aggressive, tenacious and hardworking car accident attorneys in Buffalo, New York today at 716-839-3939.

WERE YOU, OR A LOVED ONE, EJECTED FROM A CAR, TRUCK OR SUV AFTER AN ACCIDENT CAUSED BY SOMEONE ELSE'S NEGLIGENCE IN NEW YORK STATE?

CALL JED DIETRICH, ESQ. AND HIS TEAM OF SERIOUS INJURY LAWYERS IN BUFFALO, NEW YORK AT 716-839-3939 NOW TO OBTAIN THE HELP THAT YOU NEED!