Jed Dietrich, Esq. and His Team of Aggressive, Tenacious and Hardworking Attorneys and Paralegals at the Dietrich Law Firm P.C. Fight to Obtain the Best Result for People Injured by Cars While they are Backing Out. 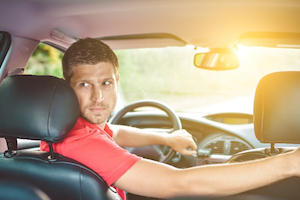 The National Safety Council reports that more than 60,000 accidents and 500 deaths occur every year in parking lots and garages. Cars and trucks have blind spots which can make pedestrians, bicyclists, motorcyclists and even other cars nearly invisible to a driver that does not adequately check their surroundings prior to backing up.

Why should you call us if you, or a loved one, were injured in or by a vehicle that was backing out? Our team of paralegals and lawyers are committed to providing the highest level of personal injury service to the people of Buffalo, New York.

Jed Dietrich, Esq. and his highly experienced, top rated and elite team of Buffalo, New York car accident injury lawyers have obtained more than $175 million on behalf of his clients. Call the Dietrich Law Firm P.C., a Best Law Firm of America, TODAY at 716-839-3939 for a free consultation if you were seriously injured by a car that was backing out. We are available 24 hours per day and 7 days per week; there is never a fee unless we win for you!

What Is A Backover Accident?

A backover accident occurs when a car, truck or SUV that is backing up strikes a nonoccupant such as another car, a pedestrian or a bicyclist.

Over 60% of backing up accidents involve large-size vehicles like trucks, vans and SUVs, which have relatively large blindspots, or areas behind the vehicle that the driver cannot see.

Although checking your surroundings is one of the primary concerns when learning how to drive, the sad truth is that people tend to get lazy and overconfident with their driving abilities over time or find themselves in a rush and fail to check their surroundings and blind spots adequately.

The National Highway Traffic Safety Administration (NHTSA) reports that there are approximately 18,000 backover injury accidents per year, with 3,000 of these resulting in incapacitating injuries. Children under the age of 5 are particularly at risk of not being seen by drivers.

If you, or a loved one, were seriously injured by a car, truck or SUV that was backing up, contact Jed Dietrich, Esq. and his aggressive, tenacious and hardworking team of lawyers and paralegals at the Dietrich Law Firm P.C., a Best Law Firm of America, today at 716-839-3939. We are available 24 hours a day and 7 days a week and there is never a fee unless we WIN for you. Jed Dietrich, Esq. and his team of highly experienced Buffalo, New York car accident lawyers will battle to obtain the best result for you if you were injured by someone else’s negligence.

Duty Of Buffalo, New York Drivers When Backing Up A Car, Truck Or SUV

A backover accident can result in serious injury or even death, especially when the person who was hit was an unprotected pedestrian, bicyclist or motorcyclist. Due to the seriousness of these accidents, New York State Vehicle and Traffic Law Section 1211 requires that:

“The driver of a vehicle shall not back the same unless such movement can be made with safety and without interfering with other traffic.”

Failure of a driver to adequately check his or her surroundings before backing up constitutes negligence. This means that the driver can be held legally responsible for any injuries and damages that result because they failed to make sure that their path was clear.

If you, or someone you love, were injured by a car, truck or SUV that backed into you, you may be entitled to compensation. Contact Jed Dietrich, Esq., a Best Lawyer of America, and his top rated team of Buffalo, New York car accident injury attorneys at 716-839-3939 so that they can fight for the compensation that you deserve after a backing out accident in Buffalo, New York; Rochester, New York or Niagara Falls, New York. The Dietrich Law Firm P.C. can be reached 24 hours a day and 7 days a week and there is never a fee unless we WIN for you.

Backing out car accidents are common in parking lots and residential areas, where there are often adults and children walking near the back of a vehicle. Backing out accidents are almost always preventable and can cause serious, even fatal, injuries. Everyone, including the government, car manufacturers, drivers and other users of the road and sidewalks can play a part in preventing, or at the very least, reducing these accidents.

As of May 2018, the U.S. Department of Transportation’s National Highway Traffic Safety Administration (NHTSA) requires lifesaving technology such as a rearview video system (RVS), also known as a backup camera, in ALL new vehicles.

In addition to using driver assistance technology to prevent accidents, backing out car accidents can also be avoided by:

If you, or a loved one, were injured by a driver who did not check their surroundings before backing out, you may be entitled to compensation. The top rated, highly experienced and elite Buffalo, New York car accident lawyers of the Dietrich Law Firm P.C., a Best Law Firm of America, are ready to help you. Contact us today at 716-839-3939.

Technology To Prevent Backing Out Accidents

The development of driver assistance technology aims to reduce the number of accidents by helping drivers better see their car, truck or SUV’s surroundings and to warn them to act in order to avoid accidents. New vehicles are now mandated to be equipped with these devices in an effort to increase safety on the road.

Technology developed to aid drivers with backing out includes:

However, having driver assistance technology in your car is not and should not be a replacement for driver caution. Even if your vehicle is equipped with these devices, a driver should always check their surroundings, behind them and their mirrors prior to backing out. The few extra seconds it takes to do this could save a life.