The Dietrich Law Firm P.C., recognized as a Best Law Firm of America and led by reliable and experienced personal injury attorney Jed Dietrich, Esq., is committed to helping car accident victims recover damages for their injuries that occurred due to another’s fault.

A U-turn accident can range from a minor incident to a major accident resulting in extensive property damage, serious injuries or even death.

Jed Dietrich, Esq. and his team of top rated Buffalo, New York car accident lawyers have settled $175,000,000.00 on behalf of their clients. While no compensation can truly undo the pain and suffering that a victim or their family may go through after a car crash, it can help to provide financial relief and support to help you through your difficult time. Let the Dietrich Law Firm P.C. fight to attempt to get the best results possible for you! Contact us today at 716-839-3939. 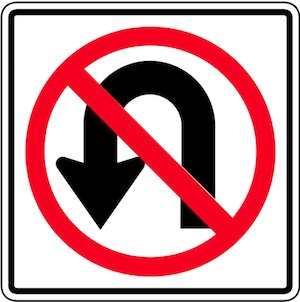 A “U-turn” in New York refers to any turn you make while driving your car in order to move in the opposite direction. Among various maneuvers that you may have to undertake while driving in Buffalo, New York; Rochester, New York; Niagara Falls, New York or throughout New York State, a U-turn is one of the most dangerous.

If you were injured by a driver that made an illegal U-turn in New York State, contact a Best Law Firm of America, the Dietrich Law Firm P.C., today at 716-839-3939 so that Jed Dietrich, Esq., a Best Lawyer of America, can fight for the compensation you deserve. Jed Dietrich, Esq. always strives to provide the highest level of personal injury service to people who were seriously injured in a car accident in Buffalo, New York; Rochester, New York; Niagara Falls, New York and throughout New York State.

ARE YOU A NEW YORK STATE DRIVER, BICYCLIST, MOTORCYCLIST OR PEDESTRIAN THAT WAS INJURED BY A DRIVER WHO WAS MAKING A U-TURN?

Minimize Your Risk Of U-Turn Accidents In New York State

U-turns can be very dangerous maneuvers if a driver does not properly warn other vehicles of their intent to make a U-turn or if a driver fails to adequately check their surroundings for other vehicles, motorcyclists, bicyclists and pedestrians.

In order to avoid getting in a U-turn accident:

If you, or one of your family members, suffered a personal injury in Buffalo due to a dangerous U-turn made by another driver, you should consult with Jed Dietrich, Esq., a Best Lawyer of America, to learn about your best legal options. Since 2005, the Dietrich Law Firm P.C. has extensive experience in helping victims recover financial damages following U-turn car accidents in Buffalo, Niagara Falls, Rochester and other parts of New York.

Contact our team of Buffalo, New York car accident lawyers today at 716-839-3939 for your free consultation. We can be reached 24 hours per day and 7 days per week and there is never a fee unless we WIN for you.

While making a U-turn, a driver must take due care to ensure that the other traffic (following as well as oncoming) will not be interrupted. If the driver fails to take adequate care, it could result in a U-turn accident.

Liability in such cases is determined using theories of negligence.

If you, or a loved one, have sustained a Buffalo or Rochester New York serious personal injury in a U-turn accident, get in touch with accomplished U-turn car accident attorney Jed Dietrich, Esq. He has obtained over $175 million in settlements and verdicts for his clients, and he will fight for the best result and compensation that you deserve after a car, SUV or truck accident caused by another driver’s fault. Call Jed Dietrich, Esq. and his team of highly experienced, seasoned and top rated U-turn accident lawyers in Buffalo, New York today at 716-839-3939 for your free consultation.

GET IN TOUCH WITH US TODAY! CALL 716-839-3939 IF YOU WERE INJURED IN A U-TURN ACCIDENT IN BUFFALO, NEW YORK; ROCHESTER, NEW YORK; NIAGARA FALLS, NEW YORK OR THROUGHOUT NEW YORK STATE.