If you have been involved in an aggressive driving accident, call the Dietrich Law Firm P.C. right now at 716-839-3939 so that our aggressive, tenacious and hardworking Buffalo, New York personal injury attorneys and paralegals can work to obtain the best result for you. Jed Dietrich, Esq., a Best Lawyer of America, has secured more than $175 million for his clients and he is on your side.

Unfortunately, road rage is a major cause of collisions and accidents. You may already be aware that distracted driving can cause accidents, but aggressive driving is involved in 66 percent of traffic deaths according to the American Safety Council (ASC).

You want the highest-quality legal representation if you have been involved in an aggressive driving accident. Jed Dietrich, Esq. and his top rated and highly experienced team have handled many aggressive driving cases successfully.

“Road rage” began as a term coined by a Los Angeles station following a number of freeway shootings. However, road rage can and does occur in Buffalo, Niagara Falls, Rochester and throughout New York State. Road rage takes place when a driver commits any number of “moving traffic offenses” that can endanger other people or property. It can also involve assault with a vehicle or weapon, and be caused by the driver or a passenger. If you have been involved in an aggressive driving collision, contact the Dietrich Law Firm P.C. now at 716-839-3939.

Who Is Most Likely To Commit Aggressive Driving? 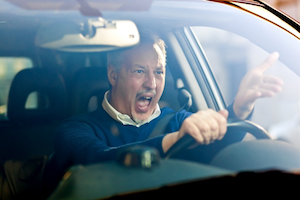 Statistically speaking, the ACS says that men under the age of 19 are most likely to be the culprits of road rage incidents, but anyone can be at fault.

Road rage often begins with less dangerous habits, such as excessive honking or hand gestures. However, it can quickly escalate to risky moves such as tailgating. The ACS estimates that 50 percent of people who receive aggressive driving from another driver will respond with aggressive moves.

Aggressive drivers live (and drive) everywhere, including New York, Rochester, Buffalo and Niagara Falls. These drivers are extra dangerous because they are also more likely to drive under the influence, not wear a seatbelt and speed. You might notice an aggressive driver in Buffalo, New York doing any of the following:

HAVE YOU BEEN SERIOUSLY INJURED BY AN AGGRESSIVE DRIVER IN BUFFALO, NIAGARA FALLS, ROCHESTER OR OTHER PARTS OF NEW YORK STATE?

As streets get more congested, especially in New York State, aggressive driving will continue to increase. The stress of driving in routinely congested traffic can bring out “road rage” in any driver, though traffic congestion is never an excuse for aggressive driving.

The National Highway Traffic Safety Administration (NHTSA) points out that even though aggressive driving has existed since vehicles were created, for decades drivers were comforted by the fact that aggressive driving was rare. That is no longer the case. Aggressive driving really emerged as a “trend” in the 1990s and has steadily increased ever since.

According to the NHTSA, what used to be infrequent “rude” behavior on the road escalated into a series of national aggressive driving news reports around 2005. Dubbed a “national problem,” the NHTSA calls the behavior of some aggressive drivers in New York “occasionally bizarre.”

According to the AAA Foundation for Traffic Safety most motorists think that aggressive driving personally threatens them and their loved ones. In fact, 75 percent of motorists in a recent study said it was “very important” that something be done about unsafe driving.

Who Gets Hurt By Aggressive Driving In New York State? 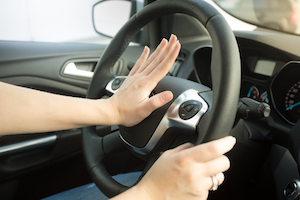 Pedestrians and bicyclists can be injured or killed by aggressive driving. In a study of 10,000 cases of road rage 33,521 pedestrians and 4,782 bicyclists were killed by a vehicle. These figures were not included statistics in the study that revealed a 51 percent increase in serious road rage incidents between 1990 – 1996.

Aggressive driving can be especially dangerous in cities where there are many cyclists and people on scooters that have recently become popular. According to the NHTSA, aggressive driving has escalated because of large changes in city demographics. The U.S. population has increased by almost 100 million in the second half of the last century. Even though traffic safety overall has improved since the 1950s, including a decline in traffic fatalities, other risks—like aggressive driving—have increased.

There are several factors that contribute to aggressive driving according to the NHSTA:

HAVE YOU BEEN SERIOUSLY INJURED BY AN AGGRESSIVE DRIVER IN BUFFALO, NIAGARA FALLS, ROCHESTER OR OTHER PARTS OF NEW YORK STATE?

Although most aggressive drivers drive dangerously only on occasion, for some it is a way of life. Others may drive aggressively as a result of a mental illness. “Chronic anger” can cause habitual aggressive driving in Buffalo, New York; Rochester, New York; Niagara Falls, New York and throughout New York State. If you, or a loved one, were injured by an aggressive driver, call Jed Dietrich, Esq. and his top rated, highly experienced and elite team of Buffalo, New York car accident attorneys today for a free consultation. We are available 24 hours per day and 7 days a week. There is never a fee unless we WIN for you!

Anyone Can Be An Aggressive Driver In New York State

The news reports on aggressive driving have not slowed down since the 1990s. You will see celebrities charged with dangerous and aggressive driving. Recently, the former Jaguars running back, Maurice Mayo, allegedly pulled out a gun on the road in a serious road rage incident. The 23-year-old athlete reports that another driver got angry with him when he did not move out of the passing lane.

The two vehicles pulled over and Mayo alleged that he got out of his car to confront the driver. According to the Fairhope Police Department, the other driver jumped out of his vehicle and onto Mayo’s hood “busting the windshield with his foot.” Mayo got a gun from his car and pointed it at the other driver. Mayo was arrested for lack of a gun permit but was soon released.