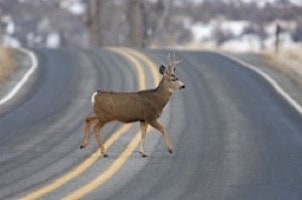 Car, truck and SUV collisions with animals are a serious problem in Buffalo, New York and its surrounding areas. An animal vehicle collision generally occurs one of two ways. Either, when a car directly strikes an animal, or when a car strikes another automobile or fixed object in an effort to avoid striking an animal that appeared on the roadway. According to the Insurance Institute for Highway Safety, in 2018 there were 190 motor vehicle crash deaths in collisions with animals.

Animal vehicle collisions can result in a great deal of property damage and severe personal injuries. These may include:

These injuries can take a long time to heal and the related medical costs involved can be significant.

If you, or a loved one, were injured in a collision with an animal, our Buffalo, New York animal vehicle accident attorneys at the Dietrich Law Firm P.C. can provide you with the guidance and legal representation that you need. Jed Dietrich, Esq. has battled to obtain over $175 Million in verdicts and settlements for people who have been injured in Buffalo, New York and throughout the state of New York.

The Dietrich Law Firm P.C., recognized as a Best Law Firm of America, has a team of top rated car accident lawyers in Buffalo, New York ready to walk you through the personal injury claim process and fight hard to secure the most favorable outcome for your injuries. Call us today at 716-839-3939.

Collisions involving animals can have unpredictable consequences. A variety of factors like how the driver reacts, how the animal reacts and how other vehicles in close proximity react all affect the outcome of the collision. The driver may strike the animal or, in an attempt to avoid the animal, the driver may brake or swerve and accidently collide with another vehicle in close proximity. Animal vehicle collisions can result in:

If you were injured in a head-on collision with a driving who was attempting to avoid an animal or you were a passenger in a vehicle that collided with a fixed object, rolled over, or was rear-ended while attempting to avoid a collision with an animal, you may be eligible for compensation for your injuries! Contact the Dietrich Law Firm P.C.’s team of animal car accident lawyers in Buffalo, New York today to find out more information.

WERE YOU INJURED IN AN ANIMAL VEHICLE COLLISION IN BUFFALO, NIAGARA FALLS, ROCHESTER OR OTHER PARTS OF NEW YORK STATE?

CALL JED DIETRICH, ESQ., RECOGNIZED AS A BEST LAWYER OF AMERICA, AND HIS EXPERIENCED TEAM OF BUFFALO, NEW YORK CAR ACCIDENT LAWYERS AT 716-839-3939 NOW TO OBTAIN THE HELP THAT YOU NEED! 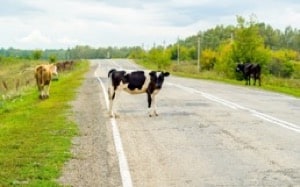 Determining liability in car accidents that involve animals can be a difficult task. Not to mention the fact that liability changes, based on both the kind of animal involved and whether or not another vehicle became involved. It is imperative that your collision is properly investigated in order to make sure that the person responsible for the collision is held accountable for the injuries that you sustained.

The following are scenarios that demonstrate some of the differences in liability in animal vehicle collisions:

If the collision is caused by an animal that is someone’s pet and/or livestock, the owner of the animal can be held liable for the accident. House pets and domesticated animals are supposed to be restrained by their owners at all times. If these animals manage to wander onto the street and cause an accident, their owner is responsible for the resulting damages.

If the accident is caused as a result of a collision with a wild animal, like a deer or coyote, no third-party can be held liable for the accident. In a case like this, the driver would generally have to rely on their own insurance company to compensate them for the damages that they sustained as a result of the collision.

If the driver stops abruptly, to avoid hitting an animal, and consequently gets rear-ended by another vehicle, they may be able to seek damages from the other driver for the damages caused to their vehicle and their person. Similarly, though, if a driver swerves into another vehicle to avoid hitting an animal, they may be liable for any property damage or injuries that they caused.

It is worth noting that some insurance companies attempt to delay or deny claims resulting from animal vehicle collisions. It is because of this that it is important for you to have an experienced personal injury lawyer by your side to negotiate with the insurance companies, on your behalf, and make sure that you are fully compensated for the damages you sustained.

The Buffalo, New York animal vehicle accident attorneys at the Dietrich Law Firm P.C., recognized as a Best Law Firm of America, are highly skilled, experienced and fully committed to attempting to provide the best legal representation for each and every client. If you were a victim of a collision involving an animal, call us today at 716-839-3939 and find out how we can help you.

What Should I Do First?

Collisions with animals, particularly large animals like deer, can cause significant damage to your person and your vehicle. For this reason, you should be extremely careful while driving along long dark stretches of roads near rural areas. If you do end up in an animal vehicle collision, you should:

WERE YOU INJURED IN A CAR COLLISION WITH AN ANIMAL IN BUFFALO, NIAGARA FALLS, ROCHESTER OR OTHER PARTS OF NEW YORK STATE?

CALL JED DIETRICH, ESQ. AND HIS AGGRESSIVE, TENACIOUS AND HARDWORKING TEAM OF CAR ACCIDENT LAWYERS IN BUFFALO, NEW YORK AT 716-839-3939 NOW TO OBTAIN THE HELP THAT YOU NEED!