Top Rated Lawyers Fighting For People Who Suffered Injuries Caused By An Airbag After An Accident In Buffalo, New York. 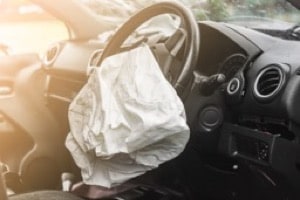 The aggressive, tenacious and hardworking personal injury attorneys at the Dietrich Law Firm P.C. in Buffalo, New York are here to help you recover damages if you have suffered injuries as a result of an airbag defect.

Jed Dietrich, Esq. and his top rated team of lawyers and paralegals at The Dietrich Law Firm P.C. have been representing people injured in car, SUV and truck accidents in Buffalo, New York since 2005. Jed Dietrich, Esq. has successfully won more than $175 million for his injured clients.

Following a car, truck or SUV accident in Buffalo, New York and beyond, your car’s airbag might deploy after a forceful impact. The airbag deploys with extreme force, releasing chemicals and dust particles into the air. Proper airbag deployment following a collision can save lives and prevent serious trauma to your head. However, if an airbag deploys incorrectly or fails to deploy, the driver or passenger of a vehicle can be seriously injured.

Jed Dietrich, Esq. and his team of elite Buffalo, New York injury lawyers are committed to working hard and aggressively and tenaciously pursuing the best result for your injuries. If you were injured as a result of an airbag that deployed incorrectly or failed to deploy when it should have, contact us today at 716-839-3939 for your free consultation to determine your legal rights. We are available 24 hours per day and 7 days per week. There is never a fee unless we WIN for you!

When Does An Airbag Deploy Incorrectly?

Even a fraction of a second’s delay in the deployment of an airbag can result in serious bodily injury or death. During that second of delay, a vehicle occupant’s head can come perilously close to the airbag or steering wheel.

The experienced, top rated legal team at the Dietrich Law Firm P.C. in Buffalo, New York understands how to build the best case on your behalf to prove your injuries occurred because of a defective airbag. Jed Dietrich, Esq., a Best Lawyer of America, and his team of Buffalo, New York airbag injury lawyers will aggressively and tenaciously pursue your case to hold the correct parties responsible for your injuries. The Dietrich Law Firm P.C. strives to get you the best compensation possible after your personal injury in Buffalo, New York; Rochester, New York; Niagara Falls, New York and beyond.

WERE YOU INJURED BY A DEFECTIVE AIRBAG IN BUFFALO, NIAGARA FALLS, ROCHESTER OR OTHER PARTS OF NEW YORK STATE?
CALL JED DIETRICH, ESQ. AND HIS TOP RATED AND HIGHLY EXPERIENCED TEAM AT 716-839-3939 NOW TO OBTAIN THE HELP THAT YOU NEED! 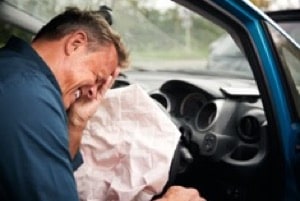 The head, neck and chest are particularly susceptible to injuries following the failure of an airbag to properly deploy or an airbag’s faulty deployment. Common injuries caused by airbags include:

How To Minimize The Risk Of Airbag Injuries

Defective airbags may significantly injure passengers. Children, seniors, pregnant women and weak or sick individuals are at a higher risk of injury due to an airbag malfunction.

Keep these preventive tips in mind to minimize the risk of an airbag injury:

Since 2005, the Dietrich Law Firm P.C. has represented people who were seriously injured in car, truck or SUV accidents in Buffalo, New York and throughout New York State. Although airbags are designed to help minimize bodily injury to occupants of a vehicle, they can contribute to your injuries if they fail to deploy or defectively deploy. Jed Dietrich, Esq. has recovered more than $175 Million in settlements and verdicts for his clients over the years. Contact Jed Dietrich, Esq. and his team of Buffalo, New York airbag injury lawyers today at 716-839-3939 so that they can provide the highest level of personal injury service for you.

Physical Signs That Indicate Injuries If you experience one or more of the following symptoms after an airbag malfunction, you may be seriously injured. If you were injured in a Buffalo, New York car, truck or SUV accident, you should seek medical treatment immediately.

WERE YOU INJURED BY A DEFECTIVE AIRBAG IN BUFFALO, NIAGARA FALLS, ROCHESTER OR OTHER PARTS OF NEW YORK STATE?
CALL JED DIETRICH, ESQ. AND HIS TOP RATED AND HIGHLY EXPERIENCED TEAM AT 716-839-3939 NOW TO OBTAIN THE HELP THAT YOU NEED!