Jed Dietrich Esq., Distinguished as a New York Super Lawyer, Is Prepared to Defend Individuals in Buffalo, New York Who Have Been Victims of Personal Injury Accidents.

There is nothing more terrifying than a positive cancer diagnosis. When the worst happens, we look for individuals who can support and guide us. At the Dietrich Law Firm P.C., we believe in placing the needs of our clients first. Your satisfaction is our top priority. If you, or a loved one, were diagnosed with non-Hodgkin’s lymphoma in the Buffalo, New York area, contact the Dietrich Law Firm P.C. now at 716-839-3939 or contact us online for your free consultation.

What is Non-Hodgkin’s Lymphoma?

Jed Dietrich, Esq. has spent the past twenty years working as a personal injury attorney, tackling countless personal injury cases across the Western New York area. Today, he and his team of recognized Best Lawyers of America are more than prepared to represent you and your loved ones. Our priority is to ensure that you receive just compensation for your injuries. Call us today at 716-839-3939 or visit us online for your free consultation. You will never be charged until we achieve a win for you!

Because Non-Hodgkin’s lymphoma originates in the lymphatic system, it can potentially spread to any part of the body. The lymph nodes, tonsils, adenoids, and even bone marrow can become infected with tumors. It is uncommon, but not impossible, for the cancer to spread to organs beyond the lymphatic system. The symptoms associated with non-Hodgkin’s lymphoma can include swollen lymph nodes in the neck, groin, or armpit area; pain or swelling in the abdomen; pain in the chest; fever; sudden unexpected weight loss; and fatigue. If these or any worrisome symptoms persist, immediately make an appointment to see your doctor. The faster cancer can be diagnosed, the greater the odds are that it can be beaten.

Determined and disciplined, Jed Dietrich, Esq. believes that in a personal injury claim the client’s needs should come first. At the Dietrich Law Firm P.C. our lawyers are highly educated and experienced, and your best resource when it comes to determining the steps to take in your personal injury case. We can be reached twenty-four hours a day and seven days a week at 716-839-3939 or by contacting us online, and we are always ready to assist you in the best possible way. 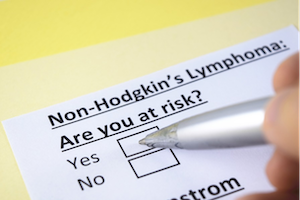 As of now, it is uncertain whether there are certain risk factors that increase the likelihood of non-Hodgkin’s lymphoma developing in the body. Factors such as age, gender, ethnicity, and even geographic location can make an individual more or less susceptible to cancer. The use of immunosuppressants, which suppress the function of the body’s immune system, can increase the likelihood that an individual will develop cancer in the lymphatic system. Patients who have recently undergone an organ transplant, who have HIV, or who were born with an autoimmune disease such as celiac disease or rheumatoid arthritis are more susceptible. In some instances, exposure to chemicals such as pesticides, insecticides, or chemotherapy drugs has led to an increased risk of non-Hodgkin’s lymphoma. While research continues into the relationship between pesticides and insecticides and cancer, they remain a potential risk factor.

Every cancer case requires its own unique combination of treatments. What those treatments are depend entirely on the age and condition of the patient, as well as the severity of the cancer and the position of the tumors. Non-Hodgkin’s lymphoma can be treated using any of the following methods: chemotherapy, immunotherapy, radiation, targeted therapy drugs, or surgery. For more information on treatment methods for non-Hodgkin’s lymphoma, refer to the American Cancer Society’s website.

DID YOU, OR A LOVED ONE, SUFFER INJURIES THE RESULTED IN A NON-HODGKINS LYMPHOMA DIAGNOSIS IN BUFFALO, NEW YORK?

CALL JED DIETRICH, ESQ. AND HIS TEAM OF QUALIFIED AND COMPASSIONATE BUFFALO, NEW YORK PERSONAL INJURY ATTORNEYS AT 716-839-3939 NOW TO OBTAIN THE HELP THAT YOU NEED!