The Dietrich Law Firm P.C., a Best Law Firm of America, Is Determined to Represent Individuals in Buffalo, New York; Niagara Falls, New York; Lockport, New York; throughout New York State and Beyond Who Have Been Injured as a Result of a Zipline Accident. 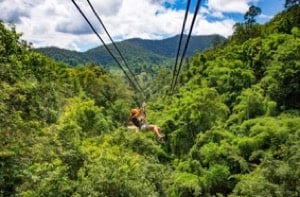 Ziplines are among the most popular outdoor activities in the United States. Used in adventure education programs, the scouts, campgrounds, and even in backyards, ziplines are appealing to all age groups. However, the dangers associated with ziplines are as manifold as the lines themselves are high. A recent study found that in a three-year period, zipline injuries have increased by over 50 percent. The reason for this increase, according to the same study, is on account of the ever-increasing popularity of ziplines across the United States. True to economics, as demand increases, organizations step forward to fulfill that demand. But with more and more ziplines appearing, it has become increasingly difficult for safety regulations to keep up with such rapid growth.

Jed Dietrich, Esq. understands that zipline accidents are life-changing events. He has represented dozens of clients in personal injury cases over the years and is more than capable of fighting on your behalf. If you believe that you, or a loved one, have cause for a personal injury claim as a result of a zipline accident in Buffalo, New York, do not hesitate to reach out to us today at 716-839-3939.

The Rise of Zip Line Popularity

The first-ever zipline company began in 1996. Inspired by the vision of Canadian Darren Hreniuk, it was seen as a new outdoor activity to compliment hiking and rock climbing. In a short period of time, the popularity of ziplines took off across the United States. Today, zipline courses can be found in nearly every state. Some of the top ranked ziplines according to Familytraveller.com include:

Ziplines in and around the Buffalo, New York area include:

As the popularity of ziplines has increased, so also have the number of related injuries and fatalities. An injury sustained from a zipline can be catastrophic. It is prudent to know the dangers and regulations of ziplines in the United States today, so as to protect yourself from future harm.

DID YOU, OR A LOVED ONE, SUFFER INJURIES FROM A ZIPLINING ACCIDENT IN BUFFALO, NEW YORK?

CALL JED DIETRICH, ESQ. AND HIS TEAM OF QUALIFIED BUFFALO, NEW YORK ZIPLINING ACCIDENT ATTORNEYS AT 716-839-3939NOW TO OBTAIN THE HELP THAT YOU NEED! 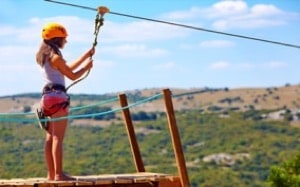 Over a twenty-year period, zipline-related injuries have increased nearly tenfold. Out of those injuries, twelve percent were serious enough to require hospitalization, and a number were fatal. Among the most common zipline related injuries are:

As is often the case with new business enterprises, there is a period of uncertainty as safety measures are first developed. This is due in part to the unprecedented nature of a new operation. Prior to the first zipline, there were no other similar activities from which to evaluate necessary safety measures. As a result, zipline-related injuries have been unfortunately high, and the numbers continue to climb as more and more are built without the safety net of set regulations.

At the Dietrich Law Firm P.C., we understand the life-changing effects of personal injury. Our team of Top Rated Lawyers is experienced, hardworking, and fully prepared to defend your right to obtain compensation. For a free consultation call today at 716-839-3939. 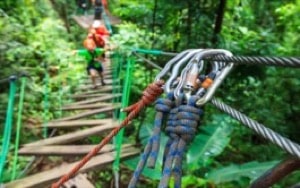 The regulations for ziplines vary from state to state, and in several, there are no set regulations in place. This failure of continuity across the spectrum leads to uncertainty as to what levels of safety measures are sufficient to protect users. It also makes it difficult to know who should be in charge of checking the safety of a zipline, and even what should be the standard to which a zipline is held.

The Association for Challenge Course Technology (ACCT) has been at the forefront of establishing zipline regulations across the United States. Even as they work to instigate uniform safety procedures, individuals should keep in mind that there is no guarantee that a particular zipline company is properly regulated or following the guidelines. If you are planning an adventure to a zipline park, be sure to take precautions and do research ahead of time so as to ensure the safest possible experience for you and your loved ones.

The Dietrich Law Firm P.C. has successfully represented dozens of clients in serious personal injury cases over the years. It is our priority to ensure that you are one hundred percent satisfied with your case. Call us now at 716-839-3939 to receive your free consultation. You will not be charged until we secure a win!

Call the Dietrich Law Firm P.C. immediately at 716-839-3939 so that our aggressive, tenacious, and hardworking personal injury lawyers can fight to obtain the best result for your personal injury claim in Buffalo, New York. We are available 24 hours a day, 7 days a week, and there is never a fee until we WIN for you!