Personal injury law focuses on cases where someone is injured due to the negligent or reckless acts of another. There are many different types of personal injury cases. The Dietrich Law Firm P.C. has handled cases for:

Example: Our client came to our firm after he was poisoned by contaminated food. Our Buffalo, New York personal injury lawyers were able to fight for compensation for his lost wages, medical bills and pain and suffering.

Example: We requested a Pre-Trial Conference to schedule a deposition in a specific case. At the conference, we scheduled an examination of the plaintiff and obtained a trial date.

At the end of a lawsuit, if you have accepted an insurance settlement offer, you are required to sign a liability insurance release form. This release states that you are releasing the negligent defendant and his or her insurance carrier from having to pay any additional money in the event that you later discover you have further damages related to your accident.

Typically, this release needs to be executed prior to the check being issued.

Example: Our client accepted a settlement offer of $750,000.00 following a bicycle accident. Prior to the client obtaining his settlement check, he had to execute a release stating that the defendant and the defendant’s insurance company would not be liable for any other costs.

In New York, personal injury cases are not assigned to a judge until one party in an action files a Request for Judicial Intervention (RJI) and pays a filing fee.

Example: Our attorneys submitted a Request for Judicial Intervention in a case where the plaintiff was sexually assaulted. We requested that there be a Pre-Trial Conference. One week after, we received a notice that a particular judge was assigned to handle the claim.

New York State mandates that in order for a plaintiff to receive compensation above No-Fault benefits, one must prove that a “Serious Injury” as defined by Article 51 of the Insurance Law occurred. A “Serious Injury” is defined as follows:

Example: Our client was in his car at a red light. He was rear-ended by another car and suffered a broken leg. Because his injury satisfied the “Serious Injury” threshold in the form of a fracture, or broken bone, we were able to pursue the case.

Even if you believe that your injuries do not qualify under the New York State Serious Injury threshold, it is imperative that you call the Dietrich Law Firm P.C. now at 716-839-3939. Only an experienced and knowledgeable attorney can review your case and determine if a claim can be pursued.

In New York State, there are certain periods of time in which you are allowed to sue a personal injury case. The statute of limitations outlines how long after a certain event you have to start your case. Importantly, there are shorter time limits to sue municipalities.

Summary Judgment is a legal proceeding where the judge typically decides to determine issues that are obvious and not to be provided to a jury for a decision.

At the beginning of a legal action, a Summons is sent to the defendant notifying them of the commencement of a lawsuit. It demands that the defendant answer the Complaint that typically accompanies the Summons.

The Complaint is a written document outlining the reasons for filing the lawsuit. It alleges exactly what brought about the lawsuit and the damages that the plaintiff is seeking compensation for.

Example: Our client initiated a lawsuit against the owner of a dog who bit her. Her Complaint outlined that the dog was known to be vicious and that the dog bite caused an injury.

Supplemental Underinsured and Uninsured Motorist (SUM) Insurance is a type of automobile insurance coverage that protects you if you were hurt by a driver who is underinsured or uninsured. This type of coverage is mandatory in the State of New York.

Example: Our client was involved in a car accident. The driver that caused the accident had a liability insurance policy with the state minimum limits of $25,000 in coverage. Our client had a SUM policy of $300,000. After exhausting the other driver’s policy, our client had $275,000 available to compensate his injuries.

A tort is a “civil wrong” that causes harm to another person. The types of torts that the Dietrich Law Firm P.C. deals with are:

Example: Our client was involved in a trip and fall at the grocery store. The defendant, the owner of the grocery store, committed a tort by negligently maintaining the floors that caused our client to fall. Therefore, we were able to sue the grocery store to compensate the plaintiff for his medical bills, lost wages and pain and suffering. 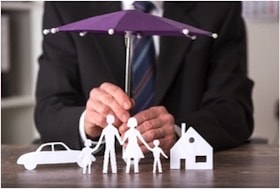 Umbrella and Excess insurance is extra liability insurance above a basic policy of insurance. It is meant to protect against tragic, unforeseeable events that cause significant damage or substantial bodily injury. These insurance policies typically have much higher policy limits.