Jed Dietrich, Esq. and His Team of Lawyers and Paralegals at the Dietrich Law Firm P.C. Fight to Obtain the Best Result for People Injured on Trampolines 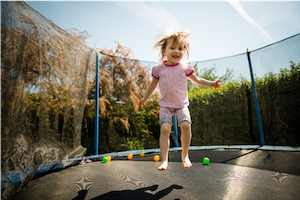 During the summer, parents want their kids to go outside and play. However, parents should think twice about buying a trampoline for their children. Simply stated, trampolines are dangerous. The American Academy of Orthopaedic Surgeons reports that there were approximately 286,000 medically treated trampoline injuries in 2014.

In a 2012 Policy Statement, the American Academy of Pediatrics directed pediatricians to “counsel their patients and families against recreational trampoline use.”

Trampoline injuries are commonly caused by:

If you, or a loved one, were seriously injured on a trampoline, contact Jed Dietrich, Esq. and his top rated team of trampoline accident lawyers in Buffalo, New York at the Dietrich Law Firm P.C. for a free consultation. Jed Dietrich, Esq. and his team of Buffalo, New York injury lawyers can be reached 24 hours a day, 7 days a week at (716) 839-3939. We will come to you and there is never a fee until we WIN for you.

Trampoline Use And Assumption Of Risk

In the 2017 case of DeMarco v. DeMarco, the New York State Appellate Division, Third Department, upheld a $800,000 verdict for a 48-year-old woman who was injured on a trampoline.

In DeMarco v. DeMarco, the plaintiff broke bones in her left foot, which required several surgeries, as a result of being thrown off balance by her nephew’s double-jumping. The plaintiff sued the homeowners, her brother and sister-in-law, to recover money damages for her injuries. The trial court gave a jury instruction on implied assumption of risk and the jury returned a verdict in favor of the plaintiff.

On the other hand, implied assumption of risk does not prevent a person from suing for their injuries. This means that an injured person can still sue for money damages even though they willingly participated in an activity they knew may be dangerous.

On appeal, the Appellate Division explained that primary assumption of risk, which prevents a person from suing for damages, should be limited to specific cases “such as personal injury claims arising from sporting events, sponsored athletic and recreative activities, or athletic and recreational pursuits that take place at designated venues.” Jumping on a home trampoline was not included in this narrow category.

Although you may have known that a trampoline could be dangerous at the time, if you were injured on a trampoline, you may be entitled to compensation. Call Jed Dietrich, Esq. and his superb and elite team of Buffalo, New York trampoline accident lawyers at (716) 839-3939 today to preserve your rights.

How Can I Prevent Trampoline Accidents? 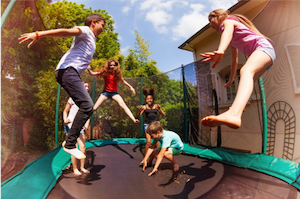 If you do have a trampoline, you can and should take precautions to protect children and prevent accidents.

Unfortunately, even if all of the above suggestions are followed, trampoline accidents can still happen and injuries can result. If you, or a loved one, were injured on someone else’s trampoline, contact the top rated and superior Buffalo, New York injury attorneys at the Dietrich Law Firm P.C. today at (716) 839-3939 so that we can help you. Jed Dietrich, Esq. and his elite team of Buffalo, New York trampoline accident lawyers are always working to provide you with superior personal injury representation.

A trampoline is considered an attractive nuisance. In general, an attractive nuisance is something dangerous that a child would find fascinating, enticing them to enter onto your property. The law recognizes that a child may not understand that a trampoline is dangerous, and therefore a property owner with a trampoline can be held legally liable for any injuries that result from use of the trampoline. This even includes neighborhood children who wander onto your property.

Many, but not all, insurance companies cover trampolines under a homeowners policy. Homeowners insurance provides a property owner with liability coverage against accidents that occur in the home or on their property, such as a trampoline accident.

Often, coverage is conditioned upon meeting certain requirements such as:

Some insurance companies exclude trampoline coverage and purchasing a trampoline could result in cancellation of your coverage.

If you, or a loved one, were injured on a trampoline, you want to select the best personal injury lawyer in Buffalo, New York to fight for you. Jed Dietrich, Esq. and his team of elite and top rated trampoline accident lawyers in Buffalo, New York are always fighting to obtain the best result for you. Contact the Dietrich Law Firm P.C. NOW at (716) 839-3939 so that we can help you.