Jed Dietrich, Esq. and His Superb and Elite Team of Lawyers and Paralegals at the Dietrich Law Firm P.C., a Best Law Firm of America, Fight to Obtain the Best Result for People Injured at Amusement Parks.

Sometimes a fun day out at an amusement park can end in hardship. Amusement park rides should be thrilling, but they can be dangerous if not properly constructed, maintained, installed, inspected or operated.

A broken seat belt or safety constraint can cause a rider to fall out of the seat while the ride is in motion, resulting in serious injury or death. Other serious injuries can arise from the owner or operator of an amusement park ride’s failure to prevent dangerous conditions.

If you, or a loved one, were injured at an amusement park, you deserve the best personal injury lawyer in Buffalo, New York. Jed Dietrich, Esq., a Best Lawyer of America and New York Super Lawyer, and his top rated team of Buffalo, New York amusement park accident lawyers have obtained $175,000,000.00 in settlements and verdicts on behalf of their clients. We will fight to obtain the best possible result for YOU! Call us today at 716-839-3939. 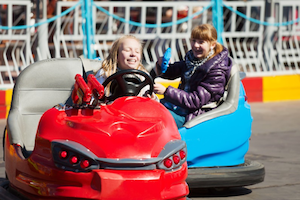 In the law there exists an “assumption of risk” defense which can eliminate or reduce the liability of a party if that party can demonstrate that the injured person voluntarily and knowingly assumed the risks associated with the particular dangerous activity that they were engaging in at the time of injury.

When enjoying a typical visit to an amusement park, there is some risk involved in riding a Ferris wheel, roller coaster, bumper cars, Tilt-a-Whirl or other rides. For example, a rider can expect to be jostled from a hit on the bumper cars or experience a rush of fear and adrenaline from the speed of a roller coaster. These are due to the nature of such rides in their normal course of operation.

However, patrons do not assume the risk that they will be injured from a ride’s malfunction or from unusual and unsafe conditions.

If an injury occurs from an unusual or unsafe condition—that is, one that is not expected from the normal operation of the ride—the operator or owner could be liable for any injuries that result. For instance, if the seat belt or lap bar does not properly lock and a person is ejected from a ride, the amusement park could be at fault for failing to recognize that a dangerous condition existed on that ride, or the ride manufacturer could responsible for a defect in the ride causing an injury.

The park owner or manufacturer would not be able to avoid liability by asserting that the rider assumed the risk of the dangerous condition because the risk of injury did not arise from the normal operation of the ride. A ride patron assumes the risk that they might hit their arm on the side of a ride during a sharp rollercoaster turn—they do not foresee or assume the risk that they will be ejected from the ride because their lap bar disengaged.

If you were injured because of an amusement park ride’s malfunction or unsafe condition, call the Dietrich Law Firm P.C. now at 716-839-3939 for your free consultation. Our team of highly experienced, aggressive, tenacious and hardworking Buffalo, New York amusement park injury lawyers are here to help. We are available 24 hours per day and 7 days per week, and there is never a fee unless we WIN for you!

In New York State, rides in amusement parks, fairs and carnivals outside of New York City must be inspected by the New York State Department of Labor. Rides deemed unsafe during the safety inspection should not be operated.

Unfortunately, even a ride that initially passed inspection may be dangerous and lead to injuries. If you, or a loved one, were injured on an amusement park ride, you want the best Buffalo, New York personal injury lawyer to investigate how your injury happened and fight for the compensation that you deserve. Jed Dietrich, Esq. and his top rated team of amusement park accident lawyers in Buffalo, New York have access to world-renowned engineers and accident reconstructionists and will help you build a case to attempt to get you the compensation that you deserve. Call the Dietrich Law Firm P.C. today at 716-839-3939. We will fight for you!

WERE YOU INJURED IN AN AMUSEMENT PARK ACCIDENT IN BUFFALO, DARIEN CENTER, GRAND ISLAND, NIAGARA FALLS, ROCHESTER OR OTHER PARTS OF NEW YORK STATE? 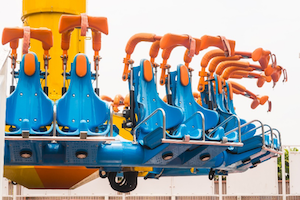 Rides at amusement parks, fairs or carnivals sometimes break down while they in motion. Tragic accidents have occurred where a ride’s seat detaches or a lap bar disengages and riders fall to the ground, resulting in serious injuries.

Sometimes, a ride can operate normally but patrons can still be injured. A ride employee or park owner may fail to realize that a dangerous condition poses a risk of injury, such as if a rider is slammed into something that is not padded to cushion the hit.

If you were injured at an amusement park because of someone else’s negligence, Jed Dietrich, Esq. and his team of highly experienced and dedicated Buffalo, New York amusement park injury lawyers will fight to obtain the best result for you. Contact us today at 716-839-3939 for your free consultation.

A design or manufacturing defect could cause a ride to break apart or stop working. If an investigation reveals that a ride or part of a ride was improperly designed or constructed before being installed and operated, the injured party may be able to sue the company responsible for building the ride. This is known as a products liability case.

To prove that a design or manufacturing defect is responsible for an injury, the following elements are relevant:

A manufacturing defect would cause an issue with the particular product, making it inconsistent with others of the same kind. This could occur if one swing on a set had improper latches installed. In contrast, a design defect would make the entire line of products defective, such as if a company designed Log Flumes which had improper weight calculations and were thus unsuitably constructed.

Strict liability, applicable in some cases, makes a person liable irrespective of if they were negligent. Strict liability claims only require proof of a defect and that the defect caused the injury. It is not required to prove that the person failed to exercise reasonable care.

If you, or a loved one, were injured on an amusement park ride that may have been improperly designed or manufactured, call the Dietrich Law Firm P.C. at 716-839-3939. Jed Dietrich, Esq. and his team of experienced Buffalo, New York amusement park injury lawyers are here to help you. Call today for your free consultation.

Amusement park owners and employees owe a reasonable duty of care to patrons. If they fail to exercise that care and a person is injured as a result, the park may be liable for its negligence. This means that the park could be liable to the injured person for monetary damages to compensate them for their injuries and other damages that they suffered.

An owner or employee may fail to exercise due care by:

This list is not exhaustive. Amusement park, fair or carnival owners and employees can be liable for other omissions that result in injury. Call the Dietrich Law Firm P.C. NOW to discuss your case and to find out if you are eligible for compensation for your injury. Jed Dietrich, Esq. and his team of aggressive, tenacious and hardworking Buffalo, New York amusement park accident lawyers seek to provide the highest level of personal injury service to people who are injured in Buffalo, New York; Darien Center, New York; Grand Island, New York; Niagara Falls, New York and beyond. Contact the Dietrich Law Firm P.C. today at 716-839-3939 to learn how we can help you.

WERE YOU INJURED IN AN AMUSEMENT PARK ACCIDENT IN BUFFALO, DARIEN CENTER, GRAND ISLAND, NIAGARA FALLS, ROCHESTER OR OTHER PARTS OF NEW YORK STATE?