Jed Dietrich, Esq. and His Team Will Take Care of You After A Rollover Car Accident in Buffalo, New York 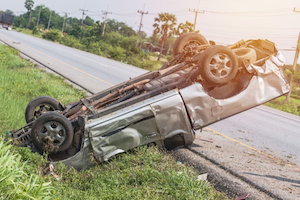 A rollover car accident can cause serious injuries, which may significantly impact your life. Part of recovery involves getting your much-deserved compensation for the suffering you go through after such a traumatic accident.

Jed Dietrich, Esq. has been handling serious personal injury claims since 1999. In 2005, Jed Dietrich, Esq. founded the Dietrich Law Firm P.C., recognized as a Best Law Firm of America, and he put together a team of experienced lawyers to help accident victims in Buffalo, New York to get the compensation that they deserve from insurance companies.

With a track record involving settlements and verdicts worth a million dollars, or more, in over 30 cases and a total of more than $175 million recovered for their clients, Jed Dietrich, Esq.’s team of professionals has the experience you want to handle your case. Contact Jed Dietrich, Esq. and his team of top rated car accident lawyers in Buffalo, New York TODAY at 716-839-3939. We are available 24 hours a day and 7 days a week.

What Is A Rollover Accident?

There are two types of rollover accidents:

Rollover accidents are not as common as other types of car accidents. In fact, according to data from the National Highway Traffic Safety Administration (NHTSA), these accidents only account for about 2% of total motor accidents in the United States.

Despite their rarity, rollover accidents are the cause of most fatalities occurring as a result of accidents on the road. Other figures show that more than one-fourth of all deaths resulting in car accidents, about 35%, happen as a result of rollovers.

The NHTSA also reports that more than three-quarters of all rollover accidents occur on rural roads. One contributing factor is the fact that speed limits are set higher on these roads, which are less busy, and there is generally an absence of safety road features common with major highways. Additionally, over 85% of these types of accidents usually involve only one vehicle.

You, and your loved ones, want the best personal injury lawyer in Buffalo, New York if you were involved in a rollover accident caused by someone else’s negligence. Jed Dietrich, Esq., a Best Lawyer of America, and his top rated and elite team of Buffalo, New York car accident lawyers have extensive experience winning car accident cases. We will fight to obtain the best result for YOU. Call the Dietrich Law Firm P.C. today at 716-839-3939.

Accidents on the road occur from various circumstances. However, there are four factors that contribute to the majority of rollover car accidents. It is crucial to know what these causes are as it becomes helpful in identifying the party responsible for the crash and the claims that should be placed.

Understanding these factors will also help you prevent accidents in the future. Common causes of rollover car accidents include:

With great evidence indicating that most rollover accidents are a result of driver negligence, taking extra precautions and adhering to traffic rules will help to avoid your car from skidding off the road.

You may need to sue a contractor, the manufacturer of your car or another driver. Insurance companies will fight you every step of the way. It is best to retain a highly experienced and seasoned attorney to fight for YOU. Contact Jed Dietrich, Esq. and his top rated team of Buffalo, New York car accident attorneys today at 716-839-3939. We can be reached 24 hours a day and 7 days a week; there is never a fee unless we WIN for you!

The extent of injuries sustained in a car, truck or SUV accident depend on the severity of the crash. When a car skids off the road and settles on its side, there may be minor injuries. On the other hand, a vehicle that rolls multiple times before stopping is bound to cause serious injuries.

Injuries can happen as a result of a collision with another car or an object, contact with broken glass or damaged metal after a crash, impact with loose cargo in the vehicle, getting tossed around in the car or being ejected from the vehicle.

The extent of bodily injury varies with each accident. That said, below are some of the common injuries found among victims of rollover car accidents as documented by the National Automotive Sampling System Database.

The five areas that are mainly affected include:

Your neck and head are deemed to be the most vulnerable parts of your body in a rollover accident. These injuries usually involve broken bones, internal tissue injuries, bruises and scratches. In more serious accidents, there could be spinal cord injuries, a traumatic brain injury or even death.

Most deaths that occur after a rollover accident happen to passengers and drivers who fail to fasten their seatbelts. Having your belt fastened will keep you in place during a crash and keep your injuries to a minimum.

Serious physical injuries may leave behind both short and long-term effects such as blindness or partial vision loss, amputation of limbs, loss of memory, loss of hearing, dental injury, chronic back pain and severe damage to internal body organs.

If you, or a loved one, were injured in a rollover car accident caused by someone else’s negligence, the Dietrich Law Firm P.C.’s aggressive, tenacious and hardworking team of Buffalo, New York car accident attorneys will be with you every step of the way. Contact us today at 716-839-3939.

What To Do When You Are In An Accident

A car accident is a disorienting and terrible experience. You may not know what to do once it happens, causing you to panic. That is why the first thing you need to do when it occurs is to remain calm. The more settled and level-headed you are, the higher the likelihood of extracting yourself from a dangerous situation and securing your well-being and that of your passengers.

The moment you realize that your car is going to roll over, remove your feet from the pedals and press your body back into the seat. It is imperative that you ensure your seatbelt is fastened tightly. Avoid leaning forward or extending your arms in an effort to protect yourself; this will only increase the chances of breaking a bone.

Once the car comes to a stop and you find that you have been injured, refrain from moving as this may cause further damage. If possible, turn off the engine. If you are able to move safely from the vehicle, it is best to do so. Call 911.

Seek medical attention, no matter how minimal you think your injuries are. A professional medical examination will detect or rule out any internal injuries which you may not recognize right away.

Once you have received medical attention, it is time to evaluate the conditions surrounding the accident. A clear recounting of what happened will help you identify the real cause of the accident.

This is when you should call a Best Lawyer of America, Jed Dietrich, Esq., who will help you make a personal injury claim. He will deal with the responsible parties on your behalf. Insurance companies try to settle claims for as little as possible. Jed Dietrich, Esq. is reliable and highly experienced in personal injury law. He will fight for the best result for you and battle for the compensation that you deserve.

Jed Dietrich, Esq. and his team of aggressive, tenacious and hardworking lawyers are at your service for any personal injury claims involving rollover car accidents in Buffalo, New York. With years of extensive experience helping the people of Buffalo, New York; Rochester, New York and Niagara Falls, New York, you can trust the Dietrich Law Firm P.C. with your case. Call 716-839-3939 for a free consultation. You never have to pay anything until we WIN for you.