At the Dietrich Law Firm P.C. our team of highly experienced and top rated Buffalo, New York overloaded truck accident attorneys have handled numerous cases for people who were injured in accidents caused by truck drivers.

Led by aggressive, tenacious and hardworking Buffalo, New York personal injury lawyer, Jed Dietrich, Esq., our Best Law Firm of America strives to provide people injured in overloaded or overweight truck accidents with the highest level of personal injury representation. We will fight for the compensation that you deserve. If you suffered serious personal injuries in an overloaded or overweight truck accident, call us today at 716-839-3939 for your free consultation.

An overloaded truck is a moving safety hazard; posing a serious threat not only to its own occupants, but also to other motorists on the road.

Data from the Federal Motor Carrier Safety Administration (FMCSA) illustrates the extent and seriousness of the threat posed by overloaded trucks.

Agencies which govern truck operations, at both the state and federal level, impose several restrictions with respect to the size and weight of large trucks. Despite these restrictions, many trucking companies and drivers tend to overload their trucks beyond these mandated weight limits in an effort to save money.

Our Buffalo, New York overloaded truck accident lawyers at the Dietrich Law Firm P.C. are available to assist you if you have suffered injuries in a truck crash. We have successfully handled truck accident cases in Buffalo, New York; Rochester, New York; Niagara Falls, New York and beyond. Jed Dietrich, Esq., a Best Lawyer of America, and his team have secured more than $175 million in verdicts and settlements on behalf of their clients. Contact us today at 716-839-3939. We are available 24 hours per day and 7 days per week to discuss your claim.

WERE YOU INJURED BY AN OVERLOADED TRUCK IN BUFFALO, NIAGARA FALLS, ROCHESTER OR OTHER PARTS OF NEW YORK STATE?

What Makes An Overloaded Truck Dangerous?

There are several reasons why an overloaded truck is considered a safety hazard on the road, including: 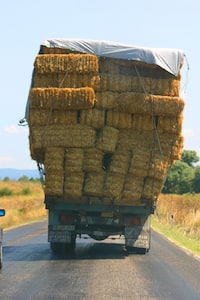 If you, or a loved one, were hurt in a serious truck collision caused by an overloaded truck or a careless driver, our team of top rated overloaded truck accident attorneys in Buffalo, New York at the Dietrich Law Firm P.C. are ready to help. We will use our experience, legal resources and knowledge of the law to support you through the process of obtaining the compensation you deserve. Contact us now at 716-839-3939 for more information.

WERE YOU INJURED BY AN OVERLOADED TRUCK IN BUFFALO, NIAGARA FALLS, ROCHESTER OR OTHER PARTS OF NEW YORK STATE?

CALL JED DIETRICH, ESQ., A BEST LAWYER OF AMERICA, AND HIS TOP RATED AND HIGHLY EXPERIENCED TEAM AT 716-839-3939 NOW TO OBTAIN THE HELP THAT YOU NEED! 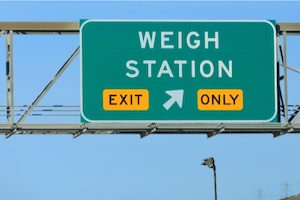 There are a large number of weigh stations set up across the country, particularly along state lines, for the purpose of weighing and inspecting large trucks. The checks are completely random in nature, so drivers do not necessarily know where they will be. As a result, overloaded trucks are detected at various check points on a regular basis.

The problem, however, is that no serious steps are taken to prevent overloaded vehicles from returning to the road. In a vast majority of cases, the drivers of these vehicles are issued a ticket and sent on their way.

In some cases, the drivers are detained until an overweight permit is granted. While these steps are effective in their own way, they are not sufficient to rid our roads of the menace of overloaded trucks.

The overloaded truck accident attorneys in Buffalo, New York at the Dietrich Law Firm P.C. are prepared to move fast to safeguard your rights, investigate the accident and consult with experts to help prove your claim. We will bring our aggressive, tenacious and hardworking negotiation and advocacy skills to protect your legal right to fair compensation for your injuries. Contact us today at 716-839-3939. There are strict time constraints that apply to truck accidents. Failure to act fast could result in the dismissal of your claim.

If you were injured in an accident caused by an overloaded truck, the highly experienced and top rated team of lawyers and paralegals at the Dietrich Law Firm P.C. will hold the truck driver and the trucking company liable for the damages they caused. This may include monetary compensation for your medical bills, time missed from work because of your injuries and your pain and suffering.

In order to receive maximum compensation for your injuries, you need to first establish that the accident was caused by the wrongdoing of the driver and/or the trucking company.

In accidents involving overloaded trucks, it is possible to hold the trucking company directly or vicariously liable, depending on the factors that contributed to the accident.

If, on the other hand, the accident was caused as a result of the driver’s actions, the trucking company can be held vicariously responsible under the following circumstances:

After an accident with a large truck, you want the best personal injury attorney in Buffalo, New York to fight for the compensation that you deserve. Jed Dietrich, Esq., a Best Lawyer of America, is here to help you. To receive legal advice regarding your truck accident injury claim, speak to one of our experienced Buffalo, New York overloaded truck accident lawyers today at 716-839-3939.

Call the Dietrich Law Firm P.C. immediately at (716) 839-3939 so that our aggressive, tenacious, and hardworking personal injury lawyers can fight to obtain the best result for your personal injury claim in Buffalo, New York. We are available 24 hours a day, 7 days a week, and there is never a fee until we WIN for you!