Jed Dietrich, Esq. and His Team of Aggressive, Tenacious and Hardworking Truck Accident Lawyers Will Fight to Obtain the Best Result After Your Accident 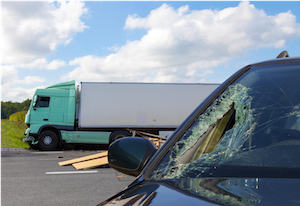 Every year, thousands of people are killed, and even more are injured, in accidents involving large trucks. Although there have been many initiatives aimed at making the trucking industry safer—the plain truth is that these vehicles are dangerous.

Weighing over 20,000 pounds and moving at high speeds, trucks can cause serious damage, injuries and even death, if not handled properly.

The charts below show the annual death and injury tolls from large truck accidents in the United States:

Call a top rated Buffalo, New York truck accident lawyer if you have been injured in a crash. Jed Dietrich, Esq. and his team of trial lawyers at the Dietrich Law Firm P.C. realize that trucks increase the risk of accidents and serious injuries on the road. Our superior staff will strive to provide you with the highest level of personal injury service in Buffalo, New York. Call the Dietrich Law Firm P.C. immediately for your free consultation. We can be reached 24 hours a day, 7 days a week at (716) 839-3939. We will come to you and there is never a fee until we WIN for you.

Trucks crash for a variety of reasons. Below are the most common causes of truck accidents:

Truck drivers typically work long hours, and in some cases can suffer from sleep deprivation and irregular sleep cycles. When drivers are tired, they have a difficult time paying attention to the road, which can lead to an accident.

The Federal Motor Carrier Safety Administration mandates that a truck driver’s shift be shorter than 11 hours. Unfortunately, there are instances when individual drivers and companies break these rules. Studies show that when hours-of-service violations occur, drivers are more likely to both fall asleep behind the wheel and get into accidents.

If a truck has a defect, the risk of a crash increases by 200%. Studies conducted in the 1980’s as well as in 2010 agree on the fact that the most common—and dangerous—deficiencies for a truck to have involve the brakes and lighting systems.

In a study of truck accidents, researchers analyzed that 55% of the vehicles had a mechanical defect. Additionally, of the trucks that were involved in accidents, 30% had enough problems that the researchers stated that they should have been taken out of service.

Large trucks weigh 20-30 times as much as an average passenger vehicle. Therefore, trucks require increased space to maneuver and a far longer period to stop.

In wet and slippery conditions, such as snow and sleet, trucks are at a higher risk to skid and slide. Trucks have a higher center of gravity than passenger vehicles, which makes it easy for them to roll over when they get into a crash.

In 2017, an IIHS study found that nearly half of all deaths among occupants of large trucks happened in crashes where the vehicle rolled over.

Underride occurs when a passenger vehicle slides underneath a truck. This is a very scary situation that can result in fatalities and/or serious injuries. It is estimated that in 50% of all deadly truck accidents, underride occurs.

Underride was such a problem that federal statutes were passed to fix the design of large trucks and trailers to prevent smaller vehicles from sliding underneath. However, a 2010 IIHS investigation concluded that in most cases, these measures failed to protect passengers.

The Federal Motor Carrier Safety Administration collaborated with the National Highway Traffic Safety Administration on a Large Truck Causation Study. The results of this project showed that in a large number of truck accidents, driver error was the predominant factor that led to the crash.

Specifically, the organizations cited the “driver” as being the critical reason for 87% of truck accidents in their study. In terms of what the driver actually did to cause the accident, the project stated that decision-making was the prominent variable that led to the accidents.

The report concluded that common truck accident factors are driver fatigue, alcohol use and speeding.

If a truck hit you, call a top rated truck accident lawyer in Buffalo, New York—Jed Dietrich, Esq.—to handle your case professionally. Jed Dietrich, Esq. and his elite team of lawyers and paralegals will fight to obtain the best results for your truck accident case. The team at the Dietrich Law Firm P.C. know how to get you the compensation that you deserve for your personal injury.

If you are injured in a truck accident, there are several parties that may be liable for the crash. These include:

You may have suffered injuries and incurred expensive medical bills as a result of a truck accident. In this scenario, you need a superb and superior lawyer with a proven track record and years of experience winning truck accident cases. You want a top rated truck accident lawyer in Buffalo, New York. Call Jed Dietrich, Esq. and his aggressive, tenacious and hardworking staff at (716) 839-3939. The Dietrich Law Firm P.C. will fight to obtain the best results for YOU after an accident.

What To Do After A Truck Accident

The actions you take after you are injured in a truck accident are crucial. While every accident is unique, here are some important steps: