Contact Jed Dietrich, Esq., a Best Lawyer of America and New York Super Lawyer, if You or a Loved One Suffered Injuries Caused from Vaping or E-Cigarettes in Buffalo, New York; Niagara Falls, New York; Rochester, New York or Throughout New York State. 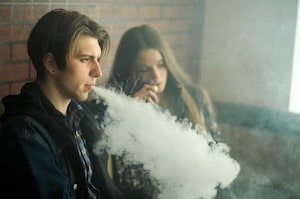 Although the use of traditional cigarettes among teenagers has substantially decreased over the last decade, the introduction of e-cigarettes and vaporizers has led to a rapid increase in smoking.

According to the Center for Disease Control and Prevention (CDC), over 20% of high school students have admitted to trying e-cigarettes or vaping at least once. It would be extremely difficult to fail to notice the rapidly increasing public health concerns pertaining to the use of vaping products by teenagers.

Since 1999, Jed Dietrich, Esq. has exclusively handled serious personal injury cases. Recently, Jed Dietrich, Esq. has seen the devastating impact that vaping and e-cigarettes can have on a user’s life, ranging from serious lung injuries to burns from exploding e-cigarettes, and even death. In addition to suffering serious bodily injuries or death, an e-cigarette or vaporizer user may lose time from work and face expensive medical bills piling up. The Dietrich Law Firm P.C. recognizes the difficulties long-term vaping injuries can cause. We aim to help ease the legal burdens that you will face so that you can spend time recovering.

The Dietrich Law Firm P.C.’s team of vaping injury lawyers in Buffalo, New York is highly experienced, aggressive, tenacious and hardworking. We are determined, disciplined and dedicated to obtaining the best possible results for injured vapers in Buffalo, New York; Rochester, New York; Niagara Falls, New York; throughout New York State and beyond. Our Best Law Firm of America will fight to obtain the best result for your serious personal injury. Insurance companies have paid Jed Dietrich, Esq. over $175,000,000.00 in verdicts and settlements to resolve personal injury claims. Contact us today at 716-839-3939 for your free consultation.

Adolescents And Vaping In The United States

In 2007, vaping products first hit the marketplace in the United States and have rapidly gained popularity ever since. Research recently published by John Hopkins Medicine states that over 2 million middle school and high school students have vaped within the past month. Vaping and e-cigarettes were first advertised as a way to quit smoking. However, according to the CDC, 40% of current vape users ages 18 to 24 never smoked traditional cigarettes prior to vaping.

Vaporizers and e-cigarettes come in a variety of styles that make them particularly appealing to young people. Vaporizers are manufactured in an assortment of sizes, designs and colors. Some vape products are even advertised as healthy. Vaping liquids often come in delicious flavors that are associated with nutritious fruits, such as banana, coconut and watermelon. This causes many young vape users to try vaping under the false assumption that vaping is completely harmless. In spite of this, research has demonstrated that most vaping products are just as harmful as traditional cigarettes. 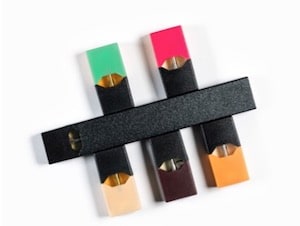 Juul pods are one of the newest and most hazardous vaporizers around. These vaporizers have become extremely popular especially with teen vapers. Research shows that vaporizers, such as Juul pods, contain double the nicotine as traditional cigarettes and Group 1 carcinogens, which have the highest potency of carcinogens. A lot of teenage Juul pod users believe that they are only vaping the flavor and the pods are risk-free. According to the CDC, roughly 33% of teenagers who used e-cigarettes stated that the availability of the flavors is the top reason why they vaped.

A study published in Tobacco Control reported that over 60% of Juul users between the ages of 15 to 24 were not aware that it always contained nicotine. This deception places tens of thousands of teenagers at risk of nicotine addiction and numerous other serious health problems.

The high amounts of nicotine in vaping products are especially likely to cause higher addiction rates in teenage users. The younger a vape user starts consuming products containing nicotine, the harder it is to quit. This could potentially cause more teen vape users to also start smoking traditional cigarettes.

If you, or a loved one, were seriously injured because of vaping, contact the legal team of vaping injury lawyers in Buffalo, New York at the Dietrich Law Firm P.C. today so that we can help you. Jed Dietrich, Esq. is a Best Lawyer of America and a New York Super Lawyer, and he is dedicated and determined to get you the best possible result after your personal injury in Buffalo, New York and throughout New York State. Contact the Dietrich Law Firm P.C. team today at 716-839-3939. We are available 24 hours per day and 7 days per week, and there is never a fee unless we WIN for you!

Steps Parents Can Take To Prevent Their Teens From Vaping

Parents can play a vital role in preventing their teens from vaping. U.S. News published a very useful article that provides steps parents can take if they believe their children might be using vaping products. The following is advice for parents that think their children may be vaping:

Vaporizers and e-cigarettes are still relatively new to the marketplace, but their true dangers are starting to become visible. With vaping becoming increasingly popular amongst teenagers and younger children, it is important to be proactive and help protect your teenagers from the dangers they pose. If you, or your teenager, suffered a vaping injury in Buffalo, New York, contact our highly experienced, aggressive, tenacious and hardworking team of Buffalo, New York teenage vaping injury attorneys today so that we can help you!

DID YOU, OR A LOVED ONE, SUFFER A VAPING INJURY IN BUFFALO, NIAGARA FALLS, ROCHESTER OR OTHER PARTS OF NEW YORK STATE?