Jed Dietrich, Esq. is a Best Lawyer of America and New York Super Lawyer Who Fights to Obtain the Best Result for People who are Injured by an E-Cigarette Explosion. 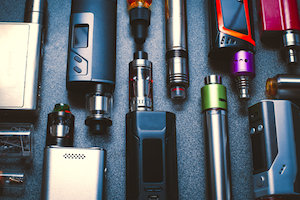 In recent years, the United States has seen a drastic growth in the e-cigarette and vape industry. These devices are typically marketed as devices to aid in quitting smoking or as a healthier alternative to conventional cigarettes because they do not contain tobacco. The use of e-cigarettes and other vaping components has found great popularity amongst people who are attempting to quit smoking and teens and young adults.

Recent news reports have shown the dangers of e-cigarettes and other vape devices. These battery-powered smoking devices have become known to explode—causing severe injury to its user.

If you suffered a vaping injury after an e-cigarette explosion, you want the best personal injury lawyer in Buffalo, New York to fight for the compensation that you deserve for your injuries. Jed Dietrich, Esq. has been practicing serious personal injury law since 1999 and is recognized as a Best Lawyer of America and New York Super Lawyer. In 2005, Jed Dietrich, Esq. founded the Dietrich Law Firm P.C. with the mission to provide the highest level of personal injury service to the people of Western New York and beyond.

The Dietrich Law Firm P.C. is recognized as a Best Law Firm of America and our team of Buffalo, New York e-cigarette explosion injury attorneys have battled to secure over $175,000,000.00 in verdicts and settlements on behalf of our injured clients. Our highly experienced, aggressive, tenacious and hardworking team of Buffalo, New York vaping injury lawyers is committed to exceeding our clients’ expectations and delivering the best outcome possible after a serious personal injury.

If you, or a loved one, were injured by an e-cigarette explosion in Buffalo, New York; Niagara Falls, New York; Rochester, New York or beyond, contact us today at 716-839-3939 for your free consultation. We are available 24 hours per day and 7 days per week, and there is never a fee unless we WIN for you!

Vaping is the inhalation of a vapor through a battery-powered smoking device such as an e-cigarette or personal vaporizer device. Most e-cigarettes contain a liquid cartridge containing nicotine, other chemicals and flavorings, which is then heated into a vapor that a person inhales.

If you were injured by an exploding e-cigarette or vaporizer device, call our highly experienced, aggressive, tenacious and hardworking team of e-cigarette explosion injury attorneys in Buffalo, New York today for the help that you need! The Dietrich Law Firm P.C., a Best Law Firm of America, is available 24 hours per day and 7 days per week at 716-839-3939 to help you. We will thoroughly investigate your claim and attempt to obtain the maximum possible compensation for your injury. Call us today!

WERE YOU INJURED BY AN E-CIGARETTE EXPLOSION IN BUFFALO, NIAGARA FALLS, ROCHESTER OR OTHER PARTS OF NEW YORK STATE?

CALL JED DIETRICH, ESQ. AND HIS TOP RATED AND HIGHLY EXPERIENCED TEAM OF E-CIGARETTE EXPLOSION ACCIDENT INJURY LAWYERS IN BUFFALO, NEW YORK AT 716-839-3939 NOW TO OBTAIN THE HELP THAT YOU NEED!

An e-cigarette is powered by a lithium-ion battery that contains two electrodes inside of it, a cathode (positively charged) and an anode (negatively charged). The two electrodes are separated by a microperforated plastic sheet which keeps the electrodes from touching, but allows lithium ions to be pushed from the cathode to the anode during charging.

If a lithium-ion battery overheats because of some malfunction in the battery, it can explode.

Causes of overheating of the e-cigarette’s lithium-ion battery, causing it to ignite or explode, include:

In 2017, the U.S. Fire Administration’s report on Electronic Cigarette Fires and Explosions in the United States identified the shape and construction of e-cigarettes to cause them to behave like “flaming rockets” when the lithium-ion battery fails.

The report further identified the status of the e-cigarette when its battery exploded, as indicated by the chart below. 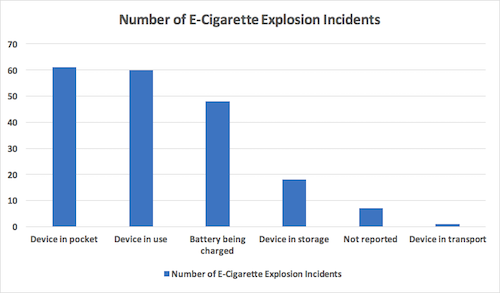 We will treat you with compassion during this difficult time and we will fight the big insurance companies to get you the compensation you deserve for your injuries. This may include monetary compensation for your medical bills, lost time from work and pain and suffering. Call us today at 716-839-3939 so that we can help you. We never get paid unless we WIN for you!

When an e-cigarette’s lithium-ion battery overheats and ignites or explodes, it can pose a serious risk of injury to a person’s body, or even death.

The explosion of the battery-powered device near the user’s face, mouth or hands, or while the device is being stored in a person’s pocket, can cause severe second or third-degree burns to a person’s skin. In addition, a person may suffer nerve and tissue damage, lose teeth or even suffer vision loss.

In addition, resent reports have identified health concerns associated with the usage of vape pens and e-cigarettes, including vaping-linked lung injuries.

Common lung injuries associated with vape pen and e-cigarette use include:

If you were injured by an e-cigarette explosion call Jed Dietrich, Esq., a Best Lawyer of America and New York Super Lawyer, today! There are strict time constraints applicable to claims for personal injuries in New York. Act now to ensure that your rights are protected! Our top rated team of e-cigarette explosion injury attorneys in Buffalo, New York will review your case and determine the best way to proceed with your claim so that we can attempt to obtain you the maximum compensation for all of your damages, and so that you can focus on your recovery. Contact us today at 716-839-3939!

DID YOU SUFFER A VAPING INJURY IN BUFFALO, NIAGARA FALLS, ROCHESTER OR OTHER PARTS OF NEW YORK STATE?

CALL JED DIETRICH, ESQ. AND HIS TOP RATED AND HIGHLY EXPERIENCED TEAM OF BUFFALO, NEW YORK VAPING INJURY LAWYERS TODAY AT 716-839-3939 TO OBTAIN THE HELP THAT YOU NEED!