Nationally Renowned Attorney Jed Dietrich, Esq. is Consistently Recognized as a Best Lawyer of America, and He Will Aggressively and Tenaciously Fight to Attempt to Obtain the Best Result Possible for People Who Were Injured in Pit Bull Dog Bite Accidents. 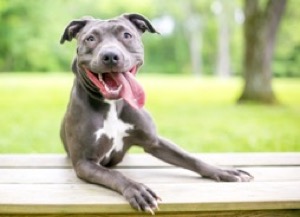 In the United States, Pit Bulls are one of the most controversial dog breeds. Although Pit Bulls and Pit Bull related breeds are often considered dangerous and connected to numerous news headlines of dog attacks, they are, in fact, the third most popular dog in the U.S., accounting for 20% of the canine population. Not only are Pit Bulls numerous, but they are also by far the most aggressive dog breed, accounting for 66% of all dog-related fatalities in recent years.

The aggressive tendencies of Pit Bulls may be explained by their origins. Pit Bulls are descendants of Old English Bulldogs but were specifically bred to engage in the sport of bull-baiting, which entailed Pit Bulls harassing and biting the face and neck of bulls or bears until exhaustion. After bull-baiting was banned in the early 19th century, breeders sought to make Pit Bulls more agile by cross-breeding Pit Bulls and Terriers for dogfighting. However, owners of Pit Bulls over the centuries have selectively bred and culled Pit Bulls that were overly aggressive and sought to make them domestic pets instead of sport animals. This is why it might be hard to predict if a certain Pit Bull has naturally aggressive tendencies as it might have been bred out of them, but nevertheless, Pit Bulls are consistently named among the topmost aggressive dogs in almost every study.

Due to the Pit Bull’s anatomy having smaller denser heads and weighing anywhere from 66 to 100 pounds, their bites are also much more dangerous than most other dog breeds; this is evidenced by Pit Bull bites resulting in 94% of medical consultations and victims of Pit Bulls bites are 5 times more likely to need surgical intervention. Medical bills, on average, from dog-related bites, increased by 14.7% in 2019 due to increased costs associated with hospital visits or surgeries. These costs put victims at a great financial loss, and this is especially true for victims suffering injuries from Pit Bull bites. 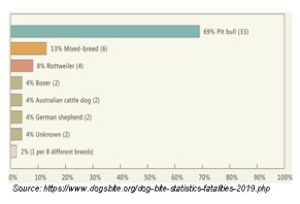 More than 937 municipalities in the United States have imposed bans or restrictions on owning Pit Bulls. Most of these bans are handled through public city housing authorities; in fact, the country’s largest housing authority in New York City bans Pit Bulls due to the many bite-related incidents associated with the breed. In terms of insurance, many states restrict the ownership of Pit Bulls by allowing homeowners and renters insurance companies to outright deny coverage of claims from Pit Bull bites or require the owner to pay higher premiums. This is because dog-related accidents accounted for $797 million in liability claims in 2019 alone, making Pit Bull owners especially risky and costly to cover. Owning a breed of dog that is banned by local ordinances will also mean insurance companies will refuse coverage, as they cannot cover claims stemming from illegal actions.

In recent years, city and state legislators have moved away from breed-specific legislation as Pit Bull and dog bite-related accidents have not decreased or made residents any safer. Instead, laws on breed-specific bans are being repealed in favor of more restrictions on owners who opt to own more aggressive breeds such as Pit Bulls. New legislation proposes to make owning a Pit Bull require a license and limit the amount of Pit Bulls one household can have. Effectively, it will make it harder to legally own a Pit Bull and might ensure that these aggressive breeds of dogs are going to more careful and diligent owners since they have to jump through several bureaucratic hoops to even obtain one.

If you or a loved one has been attacked by a Pit Bull and sustained injuries, do not hesitate to call an Elite Lawyer of America, Jed Dietrich, Esq., at the Dietrich Law Firm P.C. for a free consultation. Call us today at 716-839-3939 to find out more about how we can help you! We are available 24 hours a day, 7 days a week, and there is never a fee until we WIN for you!

Steps To Take After A Pit Bull Bite Accident

Dog bites, especially from Pit Bulls, can lead to infection, disfigurement, and other injuries. Victims of dog bites are historically small children, but for the first time in 2019, victims between the ages of 30 – 49 were the most recorded, and 85% of these were inflicted by Pit Bulls. A victim from any age group should immediately follow these steps after being bitten:

It is critical for victims of Pit Bull bites to seek not only medical attention but also legal representation. Dog bites of any kind can lead to expensive medical bills and, in severe cases, may even lead to a loss of income. By attaining top rated legal representation, victims can be put at ease knowing aggressive and skilled lawyers are working hard for them to alleviate their financial burdens and suffering that resulted from such an accident.

Do not wait to act! Call now to get a free consultation with a Best Lawyer of America, Jed Dietrich, Esq., to jump-start your Pit Bull bite claim. The Dietrich Law Firm P.C. is a nationally recognized law firm and is highly acclaimed in the field of personal injury law and can provide you with the legal representation you need to get the financial compensation you deserve!

DID YOU, OR A LOVED ONE, SUFFER INJURIES FROM A PIT BULL BITE?

Experienced Lawyers Will Fight For You

Dog bite accidents can be very traumatic, and some victims might not be aware of their legal rights. This is why anyone who has sustained an injury from a Pit Bull bite should contact Jed Dietrich, Esq., as he has over 20 years of experience in personal injury law and has fought adamantly and aggressively to get the best results for his clients. Jed Dietrich, Esq. has demonstrated this commitment throughout his long-tenured career by securing $1,000,000 or more 38 times in personal injury cases.

Jed Dietrich, Esq. and his nationally renowned team of experienced lawyers at the Dietrich Law Firm P.C. will give you the support you need for your personal injury claim. Anyone who is suffering injuries from a pit bull bite could be entitled to financial compensation and should seek the exceptionally competent legal representation that the Dietrich Law Firm P.C. can provide.