Jed Dietrich, Esq. is Recognized as a Best Lawyer of America, and He Will Aggressively and Tenaciously Fight to Attempt to Obtain the Best Result Possible for Cyclists Who Were Injured in Dog Attack-Related Accidents in Buffalo, New York. 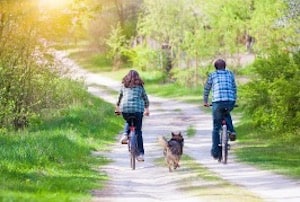 For avid or casual cyclists, encountering an aggressive dog may be all too common. Recently, cycling in the United States has become more popular in commuting to work, school, and as a leisurely activity. Bicycle sales in the United States are reaching all-time highs, and rider participation has increased 20% from just last year. This increase in cyclists may stem from numerous cities around the country upgrading their bike routes and infrastructure to accommodate more cyclists. To illustrate the vast popularity of cycling in the United States, Americans on average take five billion bike rides a year.

Coinciding with this boom in cyclist participation, dog bite attacks in the U.S. have also been on the rise. About 4.7 million dog bites occur each year, and 1 in 69 Americans are dog bite victims. Injuries sustained by cyclists from dog attacks may even be more severe than other dog bite cases, as dogs will usually attack cyclists form the rear or side of the bike, thereby increasing the chance for a cyclist to crash and sustain injuries from not only the dog bite but also the ensuing crash landing. Cyclists must be wary of dogs when out riding, whether at parks, riding in cities, or mountain bike riding near popular trails where the chances of a dog roaming around off-leash are increased.

Where Cyclists Might Encounter Dogs in Buffalo, New York

In accordance with national trends, the City of Buffalo, New York, has also seen an increase in cyclist participation. One Buffalo cyclist group recorded 24,000 participants throughout cycling events last year. Also, Buffalo boasts some of Westerns New York’s most scenic trails, such as the Niagara Scenic Parkway Trail and the Great Gorge Railway Trail. The City of Buffalo has even committed itself to a major Bicycle Master Plan, in which the City intends to increase bike trails connecting different neighborhoods to the city center and increase bike facilities. Although around 61% of dog bite-related incidents occur at the dog owner’s home, there is certainly an increased risk of encountering aggressive dogs in public spaces while cycling as dog ownership, cycling participation, and overall leisure activities begin to increase among all demographics. You may encounter an unleashed dog while bike riding in: 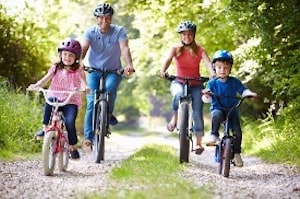 Despite these places being public spaces, in the City of Buffalo and New York State parks, dogs are always required to be on a leash when out in public. In Buffalo, city ordinances mandate that all dog owners must have their dogs on leashes when off their premises, and if their dog is found at large and unleashed, the owner of the dog could be held liable for the dog’s actions. As for New York State parks and campgrounds, dogs are not permitted to be unleashed or left unattended and they must have proof of vaccination before entering public spaces. If a cyclist is attacked and injured by a dog that is unleashed in any of these public areas, such injured cyclist is well within their rights to seek financial compensation for their injuries from the negligent dog owner.

If you, a loved one, or someone you know had to seek medical attention because of a dog-bite related accident while cycling, immediately call nationally ranked lawyer Jed Dietrich, Esq. and his team of highly qualified attorneys at (716) 839-3939. The Dietrich Law Firm P.C. can be reached at any hour and at any time of day to begin a free consultation for your dog bite injury.

Some may assume that because a cyclist is on a bike, they would be in a safer position than if they were on foot. Although there is some truth to that, as people can travel faster on bicycles, they are no less susceptible to being victims of an attack; depending on the situation. Dogs may endanger cyclists by encircling an unsuspecting cyclist, forcing them off the trail or road, or chasing the cyclist and nipping at their legs. The best way to avoid a dog attack when cycling would be to adhere to the following steps:

Cyclists should also keep in mind that they may not always be able to outrun a dog, as there could be uneven terrain or speed bumps preventing a speedy getaway. Should any cyclist be attacked by a dog, they should immediately seek proper medical attention at their nearest local hospital.

DID YOU, OR A LOVED ONE, SUFFER INJURIES FROM A DOG BITE-RELATED
ACCIDENT WHILE BIKING IN BUFFALO, NEW YORK?

CALL JED DIETRICH, ESQ. AND HIS TOP RATED AND HIGHLY EXPERIENCED
TEAM OF AMHERST, NEW YORK DOG BITE ACCIDENT INJURY
LAWYERS AT (716) 839-3939 NOW TO OBTAIN
THE HELP THAT YOU NEED!

Experienced Local Lawyers, You Can Depend On!

Injuries sustained from a dog attack or a bicycle crash can be very severe and may require extensive medical attention. Cyclists injured by attacking dogs may be able to obtain financial compensation for any injury they may have sustained. That is why you should entrust your personal injury claim with one of Buffalo, New York’s premier lawyers, Jed Dietrich, Esq., as he has 20 exceptional years of experience in personal injury law. Jed Dietrich, Esq. takes personal care of each of his clients’ cases and has secured $1,000,000 or more at least 38 times for them.