Jed Dietrich, Esq. is Recognized as a Best Lawyer of America, and He Will Aggressively and Tenaciously Fight to Attempt to Obtain the Best Result Possible for Injured Cyclists in Buffalo, New York. 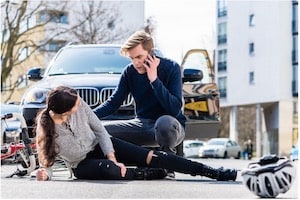 Cycling in the United States has experienced a dramatic increase in cyclist participation over the last several years. The boom in cycling can be partly attributed to cities expanding bike lanes and creating more cyclist-friendly routes that do not run alongside busy urban intersections. As an example of these initiatives, the City of Buffalo, New York, has pledged to build 300 miles of a cycling network for both bicycle commuters and casual riders within the next ten years. On a federal level, states receive loans and funding to build sidewalks, bike lanes, and trails; the funds allocated for such projects are small compared to other government spending priorities. Despite the great investments made into making cycling safer and more accessible, cycling is still an extremely dangerous activity. In 2020, approximately 675 cyclists died in car-related accidents alone, which is a slight decrease from previous years but the figure still maintains cars as the leading cause of cyclist-related deaths and overall road accidents. Not only are fatalities a concern, but non-fatal injuries are very prevalent among cyclists as cyclists are 4.9 times more likely to be injured in accidents per mile traveled than vehicle motorists, and one in every 20 cyclists is injured annually.

When looking through causes of cycling accidents, two categories can be distinctly made, with one being urban and the other being rural. Both urban and rural settings contribute to similar causes of injuries; however, each cause may be more or less dangerous depending on the setting. For example, riding on the shoulder of a highway is always risky, but when comparing urban and rural settings, it is far more dangerous to ride on rural highways than urban highways, as rural highways have narrow shoulders and sections of the shoulder are more likely to be unpaved. It is worth knowing how these two settings can cause cycling injuries and what can be done to prevent future cycling accidents.

Overall, urban cycling accidents far outpace rural accidents statistically, as 79% of accidents take place in urban settings and only 21% in rural areas. Although urban accidents are staggeringly high, it should not be too much of a surprise as 86% of Americans live in metro areas, and cities are often congested with traffic and narrow intersections. Motor vehicles are the primary culprit in vehicle-cyclist accidents in urban areas, but cyclists can also be injured by simply falling on hard pavement or by colliding with other cyclists if bike lane space is limited, as is common in high-density cities. Some main causes of urban cycling accidents are:

Of course, some accident scenarios cannot be easily avoided by cyclists; for instance, a drunk driver will not have the ability to see or gauge the speed of the cyclist, and careless or distracted drivers may also cause unavoidable accidents by virtue of their own negligence. Cyclists can, however, take some precautions in urban areas. As fractures accounted for 20% of all injuries of urban cyclists, likely due to contact with hard pavement and sidewalks, it is recommended to always wear a helmet and other protective gear as much as possible. Cities and bike groups should also raise awareness in their communities to always remind drivers to be cautious and drive defensively. Several projects by Buffalo, New York cycling advocacy groups promote better infrastructure and road safety.

Being involved in an accident can be physically painful and psychologically traumatic. Do not hesitate to act if you or a loved one were injured in a cycling accident by immediately contacting nationally recognized Elite Lawyer of America Jed Dietrich, Esq. and his team of highly qualified injury attorneys at (716) 839-3939. The Dietrich Law Firm P.C. can be reached at any hour and at any time of day to schedule a free consultation for your personal injury claim. 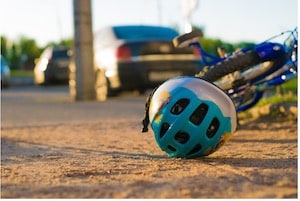 As mentioned previously, rural accidents make up just 21% of cyclist-related accidents, but nevertheless, rural accidents can produce more severe injuries than urban cycling accidents. As opposed to urban accidents where tight bike lanes and narrow, congested streets often cause accidents, in rural areas, cyclists are often injured in accidents due to a combination of poor infrastructure and high vehicle speeds. Rural roads are more likely to be neglected, and sections of unpaved shoulders where cyclists can easily lose control and fall. Also, curves in the roads may make it difficult for vehicles to see oncoming cyclists, or steep downhill roads may make it difficult for drivers to predict the speed of cyclists. Rural area cycling accidents may particularly be caused by:

Although urban accidents are more frequent than rural accidents, rural injuries are more severe as vehicles on rural roads tend to speed. To illustrate this, when there is a cyclist-vehicle-related accident with the vehicle traveling at a speed of over 50 miles per hour, the probability of the cyclist’s injuries being fatal increases when compared to average cyclist injuries. To reduce rural area cycling accidents, cyclists should wear bright and reflective protective gear to make them more visible and should avoid any country road that has narrow shoulders. Cities and counties should also do their part by investing in wider rural roads, placing signs on high-speed roadways to remind vehicles to slow down when approaching cyclists, and reducing speed limits where cyclists and vehicles are forced to share the road.

DID YOU, OR A LOVED ONE, SUFFER INJURIES IN A CYCLING ACCIDENT IN BUFFALO, NEW YORK?

CALL JED DIETRICH, ESQ. AND HIS TOP RATED AND HIGHLY EXPERIENCED TEAM OF BUFFALO, NEW YORK CYCLING ACCIDENT INJURY LAWYERS AT (716) 839-3939 NOW TO OBTAIN THE HELP THAT YOU NEED!

No Matter the Injury, Jed Dietrich, Esq. is Ready to Help You!

After being involved in any cycling-related accident, the road to recovery for some injured cyclists may leave them with significant financial loss as both fatal and non-fatal cycling accidents have accounted for 237 billion dollars in medical costs each year. To expedite recovery, anyone suffering from a cycling-related accident should contact highly accomplished and veteran injury lawyer Jed Dietrich, Esq. He has over 20 years of experience in personal injury law and has fought adamantly and aggressively to get the best results for his clients. Jed Dietrich, Esq. is deeply committed to his clients’ cases, and to prove it, he has secured at least $1,000,000 or more 38 times in personal injury cases.

Jed Dietrich, Esq. and his top ranked team of experienced Buffalo injury lawyers at the Dietrich Law Firm P.C. will give you the support you need for your personal injury claim. Anyone who is suffering injuries from a cycling-related accident may be entitled to financial compensation and should seek the exceptionally competent legal representation that the Dietrich Law Firm P.C. can provide.