Jed Dietrich, Esq. is Recognized as a Best Lawyer of America, and He Will Aggressively and Tenaciously Fight to Attempt to Obtain the Best Result Possible for Cyclists Who Were Injured in Dooring Accidents in Western New York. 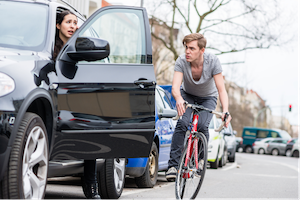 A bicycle dooring accident occurs when the driver or passenger of a vehicle opens their door and causes a cyclist to be thrown off their bike or swerve into traffic. Dooring statistics are usually not a category of their own; however, in some cities where they do track this statistic, dooring accidents are the most common type of cycling accident and are responsible for numerous fatalities. Dooring accidents are so prevalent that this particular type of bicycle accident is illegal under New York State law, and both criminal and civil liability may be imposed onto the person who negligently opens their door into traffic.

There are several solutions to minimize dooring accidents and keeping cyclists safe. There are an ever-increasing amount of sensors that are being installed in modern vehicles, and some automobile manufacturers have adopted the idea to develop a sensor to prevent dooring. Just last year, Ford developed and began implementing an LED sensor system in their new models that can detect cyclists and warn the driver after unlocking their car door. A door opening method has also been promoted to curb dooring accidents, and many advocacy and awareness campaigns have supported it. The Dutch reach method promotes people to use their off-hand when opening their car door, causing the individual to swivel their upper body and allowing them to see oncoming traffic. Several U.S. states have adopted this door opening method in their student driver manuals, and there is a push to do the same in New York. Whether solutions are found through technology or sensible door opening methods, drivers and passengers must be diligent and keep in mind to watch out for cyclists whenever opening their door into traffic.

Dooring accidents are not only the most common type of accident for cyclists, but they frequently result in severe injuries. Dooring is an especially dangerous accident as the cyclist’s acceleration will likely flip them over the top of the opened door or force the cyclist to rapidly change lanes to avoid the door, thereby causing another car to hit the cyclist from behind or, even worse, cause a cyclist to roll under a moving vehicle. The most common types of injuries that cyclists suffer from are:

As made evident from the list above, facial injuries are routinely the most common. In fact, head injuries are present in anywhere from 22% to 47% of injured cyclists. Injuries to the head and face account for more than 60% of bicycle-related deaths and are linked to long term disabilities. Not only can a dooring accident end fatally, but trauma stemming from injuries after the accident may persist for years or even be permanent in some cases.

If you or a loved one had to seek medical attention or still suffer from lingering or permanent injuries because of a dooring accident, immediately call nationally ranked lawyer Jed Dietrich, Esq. and his team of highly qualified personal injury attorneys at (716) 839-3939. The Dietrich Law Firm P.C. can be reached at any hour and at any time of day to begin a free consultation.

Who Is Liable In A Dooring Accident?

There may be several possible determining factors when looking into who is liable for a dooring accident. According to New York State Vehicle Traffic Law, the person who actually opens the door on the side of moving traffic without making sure it is safe to do so is liable. With that in mind, it may seem obvious that in most cases, the person who opened the door is liable to pay for the injuries of the cyclist.

Although the person who opens the door is usually liable, the law does require an element of negligence. Drivers, in some cases, may also be deemed liable if they allow their passenger to open their door into traffic without first warning them or if they leave their door open for an unnecessary period of time. At face value, it may appear that the person who actually opened the door is liable, but depending on the case and circumstances, the driver may also be directly or jointly liable for injuries sustained by the cyclist.

Cyclists themselves could also be partially liable for dooring accidents. New York State law shares fault between the parties involved and their compensation will be based on how much negligence is attributable to them for the accident. For example, a cyclist who was riding their bike at excessive speeds or was riding into on-coming traffic may have their compensation reduced. Even if the cyclist is found to be responsible, they will usually still receive some compensation for their injuries based on New York’s pure comparative fault law.

DID YOU, OR A LOVED ONE, SUFFER INJURIES IN A BICYCLE DOORING ACCIDENT IN BUFFALO, NEW YORK?

CALL JED DIETRICH, ESQ. AND HIS TOP RATED AND HIGHLY EXPERIENCED TEAM OF BUFFALO, NEW YORK PERSONAL INJURY LAWYERS AT (716) 839-3939 NOW TO OBTAIN THE HELP THAT YOU NEED!

The Right Attorneys For Your Claim

Dealing with traumatic injuries from a bicycle dooring accident may be exceptionally difficult to overcome. That is why, when entrusted with your claim, Jed Dietrich, Esq. and his top rated team at the Dietrich Law Firm P.C. will aggressively fight to get you the financial compensation that you deserve.

As a recognized New York Super Lawyer, Jed Dietrich, Esq. has secured at least $1,000,000 or more 38 times in personal injury cases. With over 20 years of experience, Jed Dietrich, Esq. has consistently attained results for his clients, and he has the track record to prove it. Anyone who is suffering injuries from a bicycle dooring accident could be entitled to financial compensation and should seek the exceptionally competent legal representation that a nationally ranked personal injury attorney can offer.