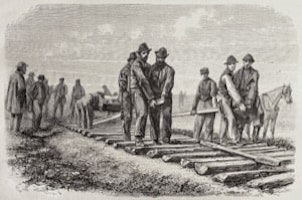 Jed Dietrich, Esq. and His Team of Lawyers and Paralegals at the Dietrich Law Firm P.C. Fight to Obtain the Best Result for Injured Railroad Workers in Buffalo, New York

During the second half of the 19th Century, American railroads expanded at an astonishing pace. On May 10, 1869, the first transcontinental railroad was completed with the joining of the Union Pacific and Central Pacific railroad tracks at Promontory Point. Over the next several decades, thousands of new rail lines were established throughout the United States. The rapid expansion of American railroads took an enormous toll in human suffering and misery. Working conditions on American railroads were obscenely dangerous. In one year, 1886, over 8,000 men lost their lives working for the railroads.

The life expectancy of a railroad brakeman was a mere seven years. Amputations and maiming were commonplace. To make matters worse, injured employees and the families of those killed on the job received nothing. There was no law at the time to provide compensation for on-the-job injuries. Congress had enough and decided the carnage must stop.

In 1908, the Federal Employers Liability Act (FELA) was passed. It was the first law in this country that provided for compensation for workers injured on the job. The FELA is a simple law. It provides that any railroad employee injured as a result of the negligence of the railroad is entitled to recover from the railroad full compensation for his injuries. It was and is a fault-based statute. In other words, to recover under the FELA, the injured worker must prove that the railroad was at fault or did something wrong.

During the early days of the FELA, the railroad was often able to avoid its responsibility to its injured employees by invoking a doctrine known as assumption of risk. Under this common law doctrine, an employee who was aware of the dangerous nature of railroad work was held to have assumed the risk of his employment and thus could not recover for his injuries.

Fortunately, in 1939 Congress stepped in once again and amended the Federal Employers Liability Act to eliminate the defense of assumption of risk. In another victory for injured railroad workers, Congress provided in the Federal Employers Liability Act that the contributory negligence of the employee would not bar a recovery; rather, it would simply reduce the amount of the recovery. For example, if the railroad is found to have been 75% at fault for an injury, and the railroad worker is 25% at fault, then the railroad worker’s compensation will be reduced by 25%.

The final ingredient which has made the FELA a powerful friend of the injured worker is the insistence of the United States Supreme Court that FELA cases must be decided by a jury.

The Supreme Court has held that if there is "any evidence, even the slightest" of negligence on the part of the railroad, then an injured employee’s case MUST be decided by a jury.

This right of jury determination has removed FELA cases from the hands of judges who were often in favor of the railroad and placed it firmly in the hands of American juries.

Jed Dietrich, Esq. and his superb and elite team of trial lawyers at the Dietrich Law Firm P.C. have extensive experience representing the victims of railroad accidents. They have a proven track record that shows their experience and ability to win cases, having settled $175,000,000.00 on behalf of their clients. If you were injured, they will fight to get you the BEST result possible!

As top rated Buffalo, New York FELA injury lawyers, the Dietrich Law Firm P.C., a Best Law Firm of America, has established relationships with dozens of doctors, specialists and other health care professionals to assist its clients in getting the compensation that they deserve. Jed Dietrich, Esq. and his team of personal injury lawyers in Buffalo, New York are dedicated to providing injured railroad workers with superior personal injury representation. Call us today at 716-839-3939 for more information or to set up your free consultation.