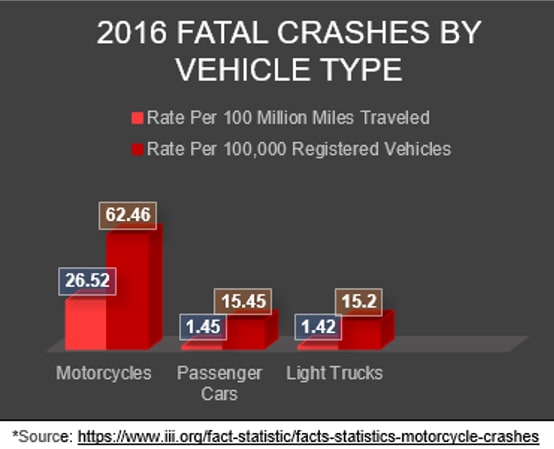 In 2016, according to the National Highway Traffic Safety Administration (NHTSA), 5,286 people lost their lives in motorcycle accidents. More than 88,000 motorcyclists were injured in accidents in 2015 alone. Motorcyclists are approximately, 28 times more likely to experience a lethal crash than drivers of other vehicles. Although head-on motorcycle crashes are rare compared to other types of accidents, they are much more deadly. Motorcyclists are much more vulnerable to fatal injuries, because motorcycles do not provide the same protections as a car, truck or SUV.

Head-on collisions commonly occur when vehicles veer into oncoming traffic. In cases where motorcyclists and/or drivers of other vehicles are not cautious enough to stay in their designated traffic lanes, they can easily cross the center line and cause a head-on collision, often at relatively high speeds. Understandably, higher speeds generate higher forces of impact that are more likely to cause severe injuries. The minimal protection that motorcycles offer their drivers make head-on motorcycle collisions some of the most devastating accidents that occur in Western New York.

Jed Dietrich, Esq. and his team of head-on motorcycle accident lawyers in Buffalo, New York have witnessed firsthand the adverse effects that injuries suffered by head-on motorcycle crash victims can have on them and their loved ones. After a head-on collision, a victim’s top priority should be restoring their health. Our team is here to assist with everything else. The Dietrich Law Firm P.C. team possesses the expertise and knowledge necessary to meticulously investigate your accident and make certain that you are in a position to obtain the highest possible recovery for your injuries.

Since 1999, Jed Dietrich, Esq. has battled to obtain over $175 Million in verdicts and settlements for people who are injured in Buffalo, New York and beyond. The Dietrich Law Firm P.C.’s team of highly experienced and top rated Buffalo, New York head-on motorcycle accident attorneys will strive to obtain the best result possible for motorcycle accident victims. Our honorable commitment to exceeding your expectations and delivering you the best possible outcome is what sets us apart from the competition. Contact us today at 716-839-3939 for your free consultation. We are available 24 hours per day and 7 days per week, and there is never a fee unless we WIN for you!

How Do Head-On Motorcycle Collisions Occur? 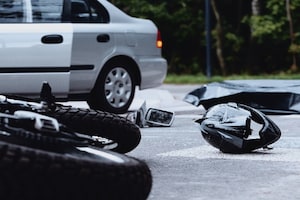 Even the most experienced motorcyclists may be powerless and vulnerable when it pertains to careless, negligent, erratic or even reckless conduct of nearby drivers of larger vehicles. Motorcycles are typically much more difficult to see than other vehicles due to their small size and slimness. Drivers of other nearby vehicles, that are not paying attention, may not even see a motorcyclist until it is too late.

If you, or a loved one, were injured in a Buffalo, New York head-on motorcycle accident, contact the Dietrich Law Firm P.C., recognized as a Best Law Firm of America, today at 716-839-3939. Our team of highly experienced and top rated Buffalo, New York head-on motorcycle accident attorneys will fight for the compensation that you deserve for the injuries that you suffered. This may include monetary compensation for your medical expenses, lost wages and pain and suffering.

When a negligent driver drifts into the oncoming lane of a nearly defenseless motorcyclist, the rider may not have enough time to avoid the collision. Even in situations where a motorcyclist avoids a head-on crash, the rider’s swift maneuvers may cause him or her to lose control of the motorcycle and end up in a collision with another vehicle and/or object. When a motorcycle is involved in a head-on collision, especially at high speeds, it can result in:

If you, or a loved one, suffered a serious injury in a head-on motorcycle accident, contact Jed Dietrich, Esq. and his top rated team of Buffalo, New York head-on motorcycle collision injury lawyers at the Dietrich Law Firm P.C. for a free consultation. Our team is available 24 hours per day and 7 days per week at 716-839-3939 or by filling out our online consultation form.

When a motorcyclist is severely injured because of another driver’s negligence, he or she can find themselves in a difficult situation financially, physically and emotionally. The injuries that a motorcyclist may suffer after a head-on accident can be life-altering and leave the rider suffering from permanent disabilities.

Victims of head-on motorcycle accidents may be required to stay in the hospital for days or even weeks, instead of being able to earn a living. All the while, costly medical bills just keep adding up, especially after the victim has stopped receiving paychecks. Victims can pursue recovery for damages through a personal injury lawsuit, which may include compensation for:

Call the Dietrich Law Firm P.C. today at 716-839-3939 if you or a loved one were injured in a head-on motorcycle collision because of someone else’s negligence. We are the aggressive, tenacious and hardworking Buffalo, New York personal injury lawyers who are ready to fight for the compensation that you deserve!

WERE YOU, OR A LOVED ONE, INJURED IN A HEAD-ON MOTORCYCLE ACCIDENT IN BUFFALO, NIAGARA FALLS, ROCHESTER OR OTHER PARTS OF NEW YORK STATE?

CALL JED DIETRICH, ESQ. AND HIS TOP RATED AND HIGHLY EXPERIENCED TEAM OF BUFFALO, NEW YORK MOTORCYCLE ACCIDENT ATTORNEYS AT 716-839-3939 NOW TO OBTAIN THE HELP THAT YOU NEED!