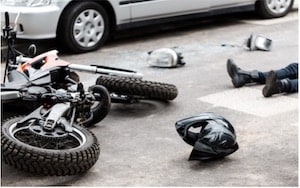 With so many of us commuting to and from work everyday and more traffic on the roads, rear-end motorcycle accidents are becoming common occurrences. For the motorcyclist, who has little to no recourse in the event that a car strikes them from behind, these types of accidents are highly dangerous and potentially fatal. However, the road goes both ways: motorcyclists frequently rear-end motor vehicles as well. In a recent accident in Clarence, New York, a motorcyclist was fatally injured after rear-ending another car. The simplest action or inaction on the road can lead to catastrophic consequences.

When it comes to answering questions regarding rear-end motorcycle accidents, the Dietrich Law Firm P.C. is your best option for timely and expert legal advice. With over $175,000,000 secured in settlements and verdicts for our clients, we are experienced in personal injury law and know how best to assist you in your Clarence, New York motorcycle accident injury case. Call us today at (716) 839-3939 or visit us online to schedule your free consultation.

It is far more common to hear of a car rear-ending a motorcycle than the other way around. However, according to a statistic from the National Highway Traffic Safety Administration, in 68% of rear-end collisions, the motorcyclist was responsible for hitting another motor vehicle, whereas only 29% of the collisions involved a motor vehicle operator striking a motorcycle. A rear-end collision by a motorcycle can be harmful to all parties involved, but it is far more likely that the worst injuries will be suffered by the operator of the motorcycle. The same report found that, of the surveyed crashes, nearly 100% of the fatalities were sustained by the motorcycle drivers themselves.

By design, motorcycles are less crashworthy than motor vehicles, meaning they offer little, if any, protection to motorcycle operators and passengers in the event of a collision. Motorcycles cannot withstand the same damage as a standard car. The rear-end accident in Clarence, New York, would have likely turned out differently had it involved two motor vehicles instead of a motorcycle. Both motor vehicle operators and motorcyclists have a responsibility to exercise caution while on the road so as to safeguard the lives of those around them.

Regarded to be a Best Lawyer of America, Jed Dietrich, Esq. has accumulated decades’ worth of experience in personal injury law and is prepared to represent individuals injured as a result of motorcycle-related accidents in Clarence, New York. Call today at (716) 839-3939 or contact us online to begin the process – you will never be charged a fee until we secure you a win! 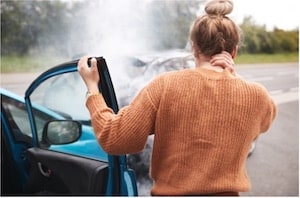 Whiplash refers to the sudden unintentional movement of the head as a result of an external blow. It is extremely common in rear-end collisions where the force of one vehicle striking another causes the head to jerk suddenly, resulting in injury to the neck. The average adult human head weighs roughly 15 pounds. It is seated at the top of the cervical spine – the section of the spine that extends from the base of the skull to the base of the neck. When a sudden impact hits the body, the head will be thrown forward or backward, over-stretching and sometimes ripping muscle, tissue, and ligaments in the neck and shoulders.

Most individuals who suffer from whiplash recover within a few weeks, but symptoms vary depending upon the severity of the trauma. In some cases, whiplash can cause permanent damage that manifests later down the road. The most common symptoms of whiplash include:

For individuals involved in rear-end collisions, whiplash can sometimes lead to long-term side effects, including frequent headaches, difficulty sleeping, and back pain. One study conducted on esophageal injuries in rear-end collisions found incidents of severe injury to the esophagus. These injuries, which involved lacerations to the throat and fractured vertebrae, resulted in fatalities in 50% of the cases studied.

The treatment for a whiplash injury varies depending upon the severity of the trauma. For some, rest and medication are sufficient to ease painful symptoms. In other cases, a doctor might prescribe stretches, exercises, and physical therapy to attempt to recover lost range of motion resulting from an accident.

DID YOU, OR A LOVED ONE, SUFFER INJURIES FROM A MOTORCYCLE ACCIDENT IN CLARENCE, NEW YORK?

CALL JED DIETRICH, ESQ. AND HIS TEAM OF HIGHLY QUALIFIED CLARENCE, NEW YORK PERSONAL INJURY ATTORNEYS AT (716) 839-3939 NOW TO OBTAIN THE HELP THAT YOU NEED!