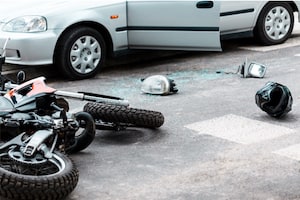 Jed Dietrich, Esq., a Best Lawyer of America and New York Super Lawyer, and his top rated and elite team of Buffalo, New York motorcycle accident lawyers at the Dietrich Law Firm P.C. have over 20 years of experience representing people injured in motorcycle accidents caused by someone else’s negligence.

Since 1999, Jed Dietrich, Esq. has secured settlements and verdicts totaling over $175 Million for his clients in Buffalo, New York and beyond; including 33 cases where the victims were awarded $1 Million, or more. Every day, Jed Dietrich, Esq. strives to continue obtaining the best results possible for his injured clients.

WERE YOU INJURED IN A MOTORCYCLE ACCIDENT IN BUFFALO, NIAGARA FALLS, ROCHESTER OR OTHER PARTS OF NEW YORK STATE?

The small size and, often, quiet nature of motorcycles makes them less visible to other vehicles on the road—particularly to inattentive drivers. A motorcycle accident can cause serious bodily injury or death to occupants of the motorcycle. Data from the National Highway Traffic Safety Administration (NHTSA) shows that in 2017, on a per-mile-traveled basis, the number of people killed in motorcycle accidents was 27 times more frequent than people being killed in car crashes.

Although our team of Buffalo, New York motorcycle accident attorneys is here to fight for the compensation that you deserve after a motorcycle accident, it is our hope that motorcyclists on the roads stay safe. If you are a motorcycle rider, it is extremely important for you to be aware of the factors that contribute to motorcycle crashes so that you can take the necessary precautionary measures and ride safely.

Motorcycle accidents commonly occur because of the following:

WERE YOU INJURED IN A MOTORCYCLE ACCIDENT CAUSED BY SOMEONE ELSE’S NEGLIGENCE IN BUFFALO, NIAGARA FALLS, ROCHESTER OR OTHER PARTS OF NEW YORK STATE?

CALL JED DIETRICH, ESQ. AND HIS TOP RATED AND HIGHLY EXPERIENCED TEAM OF MOTORCYCLE ACCIDENT ATTORNEYS IN BUFFALO, NEW YORK AT 716-839-3939 NOW TO OBTAIN THE HELP THAT YOU NEED!

A motorcycle accident can result in serious injuries including broken bones, a traumatic brain injury, neck and back injuries, paralysis injuries, amputation injuries or even death. Injuries after a motorcycle accident can be life-changing resulting in expensive medical bills, lost time from work and pain and suffering. If you were injured in a motorcycle accident, you want the best personal injury lawyer in Buffalo, New York to fight for the compensation you deserve. Jed Dietrich, Esq., a Best Lawyer of America and a New York Super Lawyer, has secured over $175 Million in settlements and verdicts on behalf of his injured clients, and you can count on him to fight for the compensation that you deserve for your injuries.

If you are a motorcyclist who was injured because of someone else’s negligence in Buffalo, New York; Rochester, New York; Niagara Falls, New York; throughout New York State and beyond, contact Jed Dietrich, Esq. and his team of top rated Buffalo, New York motorcycle accident lawyers today. We are available 24 hours per day and 7 days per week, and there is never a fee unless we WIN for you! Call us today at 716-839-3939 for your free consultation.