Jed Dietrich, Esq. and His Elite Team of Lawyers and Paralegals at the Dietrich Law Firm P.C. Fight to Obtain the Best Result for People Injured in Motorcycle Accidents in Buffalo, New York.

A 52-year-old man was injured in a motorcycle accident after a vehicle failed to yield the right-of-way and crashed into him. Although the man survived this tragic accident, he suffered two right ankle fractures, two left hand fractures, peripheral vascular disease and deep venous thrombosis.

As a result of this motorcycle accident, the man was required to undergo four different complex surgeries. The man incurred expensive medical bills and significant pain and suffering. Jed Dietrich, Esq. fought to obtain a $750,000.00 settlement for the man to compensate him for his injuries.

Stories of terrible motorcycle accidents that result from another driver’s negligence are heartbreaking and all too common in Buffalo, New York and throughout New York State. These tragic happenings inspire Jed Dietrich, Esq. to strive to provide the highest level of personal injury service to the people of Western New York each and every day to get them maximum compensation for their injuries.

Since 1999, Jed Dietrich, Esq. has battled to obtain over $175 Million in verdicts and settlements for people who are injured in Buffalo, New York and beyond. The Dietrich Law Firm P.C.’s team of highly experienced and top rated Buffalo, New York motorcycle accident injury attorneys will strive to obtain the best result possible for motorcycle accident victims. Our honorable commitment to exceeding your expectations and delivering an excellent outcome is what sets us apart from the competition.

Western New York’s scenic views to nice back roads can make for some of the most enjoyable motorcycle riding around New York. For many motorcyclists, riding is a way of life and a great chance to take pleasure in the open roads outside of Buffalo, New York.

Unfortunately, for even the most vigilant motorcyclists, other larger vehicles frequently do not pay attention to motorcycles within their immediate proximity. Motorcyclists are particularly susceptible to accidents when they are in another vehicle’s blind spot as it is changing lanes. Motorcyclists are incapable of regulating nearby drivers and regularly end up in accidents. To make matters worse, riders have greatly increased chances of getting severely hurt or even getting killed.

Other vehicles might not spot a motorcycle for a variety of different reasons, including poor weather conditions, bad traffic, the speed at which the motorcyclist is traveling or distracted driving. Research has demonstrated that approximately two-thirds of all accidents involving motorcycles result from other vehicles infringing on the motorcyclists’ right-of-way.

Even the most watchful driver may not see a motorcyclist until it is too late, because the ability for humans to see small objects traveling at high speeds is limited. Thus, when a motorcycle is approaching from afar, it only takes up a fraction of the other driver’s sight. If the motorcyclist is speeding, the driver might not even realize the motorcycle is nearby until after hearing it zoom by.

If you were injured in a motorcycle accident caused by someone else’s negligence, call highly experienced, aggressive, tenacious and hardworking Buffalo, New York motorcycle accident injury lawyer Jed Dietrich, Esq. for the help that you need! The Dietrich Law Firm P.C., a Best Law Firm of America, is available 24 hours per day and 7 days per week at 716-839-3939 to help you. Call us today! 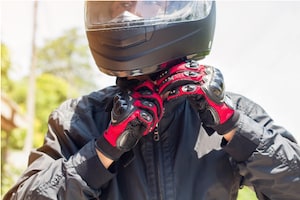 Since it does not require a lot for a motorcyclist to get hurt in an accident, riders are roughly 28 times more prone to experiencing a lethal crash than both car and truck drivers. Even though motorcycles make up only 3% of all registered vehicles, 11% of all vehicle accidents and 14% of all fatalities comprise of motorcycles.

Most cars are equipped with several safety mechanisms to safeguard both passengers and drivers, including seatbelts, front and side airbags and automatic emergency braking. On the other hand, most motorcycles are not equipped with any of the same safety equipment. Motorcyclists must depend only on their jackets, helmets, gloves, other safety clothing and boots.

In 2017, the amount of motorcycle riders that were killed in accidents fell 3% to 5,172. Although there was a slight decline, motorcyclists continue to be disproportionately represented in traffic death toll.

WERE YOU INJURED IN A MOTORCYCLE ACCIDENT CAUSED BY A NEGLIGENT DRIVER IN BUFFALO, NIAGARA FALLS, ROCHESTER OR OTHER PARTS OF NEW YORK STATE?

CALL JED DIETRICH, ESQ. AND HIS TOP RATED AND HIGHLY EXPERIENCED TEAM OF MOTORCYCLE ACCIDENT INJURY LAWYERS IN BUFFALO, NEW YORK AT 716-839-3939 NOW TO OBTAIN THE HELP THAT YOU NEED!

Injuries resulting from motorcycle accidents vary in seriousness from tiny cuts to complete paralysis or even loss of life. While less significant injuries can typically be mended with little treatment, more serious injuries often leave motorcyclists in need of numerous life-saving surgeries and intensive life-long medical supervision. The most commonly suffered motorcycle injuries comprise of the following:

Studies demonstrate that motorcycle related accidents are far more likely to result in serious injuries, fatalities and massive medical expenses than car accidents. According to a CDC study, 30% of non-fatal motorcycle injuries are suffered on the legs and feet. Additionally, motorcyclists are five times more likely to experience injuries than any other type of driver.

Most motorcycle accidents have been shown to be the result of the other driver’s negligence. Drivers of other vehicles regularly cut off motorcyclists or swerve into their lanes. Motorcycle crashes that lead to injury are most commonly the consequence of the following: 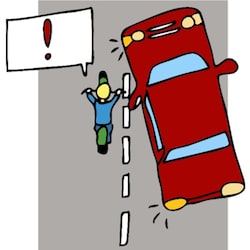 Roughly half of all motorcycle accidents result when another vehicle is attempting to make a left-hand turn while the motorcyclist is going straight. Even extremely proficient veteran motorcycle riders are not capable of predicting the actions of other drivers.

Motorcycle crashes are frequently caused by other elements out of the rider’s control, including bad weather conditions, poor road upkeep, defective equipment and road debris. Regrettably, even a fairly small motorcycle crash can have fatal consequences for the rider.

Contact The Dietrich Law Firm P.C., A Best Law Firm Of America, After A Motorcycle Accident In Buffalo, New York

A motorcycle accident injury can leave the victim with devasting health difficulties that require costly medical care and extensive recovery times. Motorcycle accident victims, depending on the seriousness of their accidents, could end up with total paralysis or traumatic brain injury and require permanent medical supervision.

In such an unfortunate event, fair and full compensation for the motorcycle accident victim will be critical for his or his survival. Victims can pursue recovery for damages including medical treatment, pain and suffering, lost wages and future losses, through a personal injury lawsuit. Furthermore, if you lost a family member in a motorcycle accident, although nothing can erase the pain of your loss, you may have the right to file a wrongful death claim.

With over 20 years of experience and more than $175 Million recovered on behalf of his clients, you can depend on Jed Dietrich, Esq., a Best Lawyer of America and New York Super Lawyer, to fight relentlessly to secure the compensation that you deserve for all of your losses. The Dietrich Legal Team will zealously fight to obtain the best results for your motorcycle accident case in Buffalo, New York; Rochester, New York; Niagara Falls, New York; throughout New York State and beyond.

If you, or a loved one, suffered a serious injury in a motorcycle accident, contact Jed Dietrich, Esq. and his top rated team of Buffalo, New York motorcycle accident injury lawyers at the Dietrich Law Firm P.C. for a free consultation. Our team is available 24 hours per day and 7 days per week at 716-839-3939 or by filling out the online consultation form.