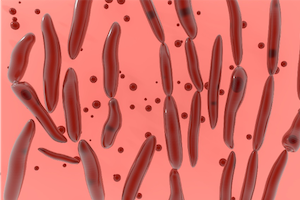 Botulism poisoning is a very rare yet extremely serious illness that can be transmitted through food, contact with tainted soil or open wounds. Foodborne botulism, infant botulism and wound botulism are the three most common types of botulism. Botulism results from a toxin released by a type of bacteria called Clostridium botulinum. While this type of bacteria is rather common, it can only thrive in conditions that contain little to no oxygen. According to the Centers for Disease Control and Prevention (CDC), in 2017, there were 182 confirmed cases of botulism reported throughout the United States. Roughly 3 to 5 percent of those with botulism poisoning suffer fatalities.

Every day Jed Dietrich, Esq. and his top rated team of botulism food poisoning attorneys in Buffalo, New York at the Dietrich Law Firm P.C. strive to provide the highest level of personal injury service to people who have suffered from foodborne illnesses and food poisoning in Western New York.

The Dietrich Law Firm P.C.’s team of Buffalo, New York botulism poisoning lawyers have witnessed the devastating impact that botulism poisoning can have on an individual’s life. In cases where botulism is left untreated, it can cause breathing difficulties, total paralysis and even death. Beyond experiencing pain and distress, individuals with botulism face costly medical expenses and lost time from work. The Dietrich Law Firm P.C. recognizes the impediments botulism poisoning can cause, and believe that those responsible for your injuries should be held accountable. We aim to help ease the financial burdens that you will face so that you can move on with your life. Contact the Dietrich Law Firm P.C., recognized as a Best Law Firm of America, for the aggressive and tenacious representation that you need. We can be reached 24 hours per day and 7 days per week at 716-839-3939. Call us today.

According to the CDC, 65 percent of botulism poisoning cases take place in infants under the age of one. Infant botulism commonly results from eating foods containing botulism spores, such as corn syrup or honey. Botulism spores can thrive inside infants’ intestinal tracts and release the botulism toxin. Most adults and older children have already developed natural defenses which prevent the bacteria from flourishing.

In 2017, foodborne botulism accounts for roughly 10 percent of all botulism cases. Different food sources, such as commercially canned goods that did not go through proper processing or home-canned foods create a fertile breeding ground for the bacteria. The World Health Organization (WHO) revealed that bacteria containing botulism has been detected in the following foods:

It is worth noting that botulism cannot be passed from person to person. In order to get foodborne botulism poisoning, a person has to consume the toxins or spores through food.

If you, or a loved one, have eaten food that caused botulism poisoning, call our legal team of botulism food poisoning attorneys in Buffalo, New York at the Dietrich Law Firm P.C. today at 716-839-3939. We are available 24 hours per day and 7 days per week, and there is never a fee unless we WIN for you! 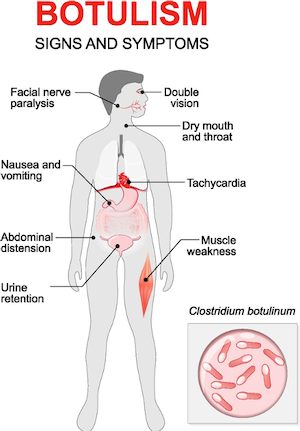 Ordinarily, symptoms of foodborne botulism occur anywhere from 18 to 36 hours after consuming contaminated food. Nevertheless, symptoms can start to appear in as little as 6 hours or up until as many as 10 days after the infection initially transpires.

Common signs of foodborne botulism include:

Botulism toxins cause muscle paralysis which can result in a majority of the above symptoms. When left untreated, the poisoning may make symptoms even worse, causing paralysis of certain muscles throughout the body.

If you suspect you, or someone you know, might have botulism, it is important to seek medical attention immediately. Survival is highly dependent on early diagnosis and treatment. In order to diagnose botulism, a doctor may perform a physical examination, brain scan, spinal fluid exam or a nerve and muscle function test. Doctors will inquire about what you have eaten within the past few days and if anyone else consumed the same foods, in order to try and identify potential sources of the botulism. Further, doctors may take samples of your stool and blood to examine for the presence of any toxins.

Botulism poisoning is treated with a medication called antitoxin, which prevents the toxins from attacking nerves throughout the body and causing further harm. Unfortunately, antitoxin does not undo the damage already caused by botulism. If the poisoning was severe enough to paralyze muscles involved in breathing, it may be necessary for you to stay on a ventilator until you can breathe without any assistance. Depending on the severity of your symptoms, you may be required to stay in the hospital for days or even months until you begin to recover.

DID YOU, OR A LOVED ONE, SUFFER FROM BOTULISM POSIONING AS A RESULT OF CONSUMING CONTAMINATED FOOD IN BUFFALO, NIAGARA FALLS, ROCHESTER OR OTHER PARTS OF NEW YORK STATE?

CALL JED DIETRICH, ESQ. AND HIS TOP RATED AND HIGHLY EXPERIENCED TEAM OF BUFFALO, NEW YORK FOODBORNE ILLNESS ATTORNEYS AT 716-839-3939 NOW TO OBTAIN THE HELP THAT YOU NEED!