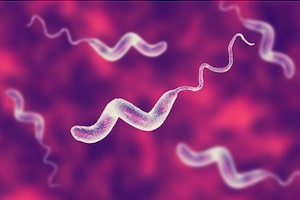 Restaurants and food service establishments are obligated to provide a safe and healthy dining experience for all patrons. For 48 million people annually, foodborne illness can turn a pleasant dining experience into a miserable few days. Campylobacter is a common type of foodborne illness. Campylobacter may pass in a matter of days, but it can also have a serious health impact.

If you, or a loved one, suffered serious illness or personal harm as the result of campylobacter food poisoning, you may be entitled to monetary compensation for your injuries. The Dietrich Law Firm P.C. has a track record of success with personal injury cases and we will fight diligently in our attempt to get you the compensation you deserve. Our team of Buffalo, New York campylobacter food poisoning personal injury lawyers strives to provide the highest level of personal injury service to the people of Western New York. Contact the Dietrich Law Firm P.C. twenty-four hours a day, seven days a week, by going online or by calling 716-839-3939.

Campylobacter (or campylobacteriosis) is an illness resulting from ingestion of the Campylobacter bacteria. The CDC estimates that 1.5 million people in the United Sates suffer foodborne illnesses from campylobacter every year. 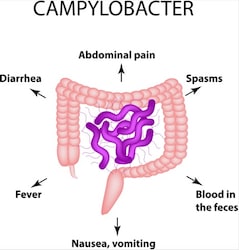 Campylobacter has many symptoms that are commonly associated with food poisoning, such as:

The CDC indicates that campylobacter symptoms typically manifest 2 to 5 days after ingestion. The main symptom of campylobacter is diarrhea. Like any foodborne illness, severe diarrhea or vomiting can lead to dehydration and dizziness. If you, or a loved one, become severely dehydrated as the result of an apparent foodborne illness, please seek the advice of a medical professional immediately.

In some cases, campylobacter can have a greater and long-lasting impact. People with more severe cases of campylobacter may experience arthritis, temporary paralysis or Irritable Bowel Syndrome (IBS).

According to the CDC, some people are at greater risk of serious, life-threatening infection from campylobacter. These people tend to have pre-existing conditions, such as:

In these cases, the CDC says the campylobacter may spread to the bloodstream and could ultimately result in a life-threatening infection.

If you, or someone you love, suffered serious illness after unintentionally ingesting campylobacter at a restaurant, business or other food establishment, the Dietrich Law Firm P.C., recognized as a Best Law Firm of America, can help. Our dedicated team of Buffalo, New York campylobacter food poisoning personal injury lawyers and paralegals will investigate your case and begin the fight for you today! If you are unsure if your case qualifies you for compensation, we will be happy to provide you will a FREE consultation. At the Dietrich Law Firm P.C. there is never a fee until we win for you! Call 716-839-3939 today!

HAVE YOU SUFFERED A CAMPYLOBACTER INFECTION FROM CONTAMINATED FOOD IN BUFFALO, NIAGARA FALLS, ROCHESTER OR OTHER PARTS OF NEW YORK STATE?

How Do You Contract Campylobacter?

Some common causes of campylobacter illness include:

Campylobacter may contaminate food that we eat at home or food we consume at food service establishments. Contamination may happen on produce farms, during the stocking or transport process, or during food preparation. If food is not handled properly, campylobacter may transfer from one food to the next and cause serious illness.

If you believe you contracted campylobacter from a restaurant, you may be entitled to compensation. The Dietrich Law Firm P.C. and its highly experienced team of campylobacter food poisoning personal injury lawyers in Buffalo, New York, will work diligently in their attempt to get you the compensation and peace of mind you deserve. Contact us today at 716-839-3939 so we can begin the fight for you!

When food is prepared at a food service establishment, the employees must take appropriate measures to ensure that the food remains safe. Many procedures must be followed to ensure the elimination of campylobacter from food and to prevent cross-contamination with other food items. These procedures include, but are not limited to:

If you, or someone you love, suffered food poisoning as a result of campylobacter consumption, and that consumption resulted from the unsafe practices of a food service establishment, contact the Dietrich Law Firm P.C. today. Our top rated team of campylobacter food poisoning personal injury lawyers in Buffalo, New York, has a track record of success with food poisoning cases and we will provide the same care and dedication for your case. Call 716-839-3939 for your FREE consultation today!

DID YOU SUFFER A CAMPYLOBACTER INFECTION AS A RESULT OF FOOD CONTAMINATION IN BUFFALO, NIAGARA FALLS, ROCHESTER OR OTHER PARTS OF NEW YORK STATE?

CALL JED DIETRICH, ESQ. AND HIS TOP RATED AND HIGHLY EXPERIENCED TEAM OF BUFFALO, NEW YORK FOOD POISONING INJURY LAWYERS AT 716-839-3939 NOW TO OBTAIN THE HELP THAT YOU NEED!