Jed Dietrich, Esq. is Recognized as a Best Lawyer of America and New York Super Lawyer Who Fights to Obtain the Best Result for Exonerated Individuals Injured as a Result of Wrongful Convictions. 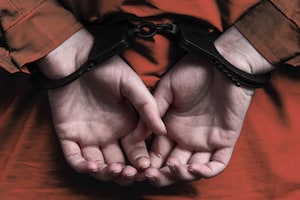 It is not easy to accurately assess the true extent of wrongful convictions that take place every year in the United States. Each state employs different systems for counting the number of exonerations. By definition, a wrongful conviction is when someone is found or pleads guilty of a crime, which later proves to be erroneous. According to the National Registry of Exonerations (NRE), there have been 2,529 innocent people exonerated from 1989 until now, after having served a combined total of 22,315 years imprisoned. Spending years, if not decades, of your life in a cell for a crime you never committed is an indescribable tragedy, but one that happens at an alarming rate. Being wrongfully accused and subsequently convicted of an offense is a nightmare that most people cannot ever even imagine. Regretfully, hundreds, if not thousands, of innocent people in the United States are forced to suffer the harsh reality of hoping and praying every day for an exoneration. While some of these people may be lucky enough to be released, many others serve their entire prison terms without exoneration or anyone ever discovering the truth.

Our community is only now starting to become fully aware of the damages that wrongful convictions have placed on the exonerated and their families’ lives. Demoralizing injustices like these inspire Jed Dietrich, Esq. to strive to provide the highest level of legal representation to exonerees and the wrongfully convicted each and every day. If you were just exonerated, it is crucial that you contact the Dietrich Law Firm P.C. to evaluate your claim. The Dietrich Law Firm P.C.’s team of exoneration lawyers in Buffalo, New York is highly experienced, aggressive, tenacious and hardworking. We are determined, disciplined and dedicated to obtaining the best possible results for those wrongfully convicted in Buffalo, New York; Rochester, New York; Niagara Falls, New York; throughout New York State and beyond.

Since 1999, Jed Dietrich, Esq. has fought against grave injustices for his clients. Jed Dietrich, Esq. has battled to obtain over $175 Million in verdicts and settlements and is uncompromising against an unfair legal system as well as corrupt police and malicious prosecutors. The Dietrich Law Firm P.C.’s team of highly experienced and top rated Buffalo, New York exoneration attorneys possess the skills necessary to meticulously investigate your wrongful conviction claim and ensure that you are in a position to receive the highest possible recovery for your lost time, pain and suffering, loss of consortium and all other damages. Contact us today at 716-839-3939 for your free consultation. We can be reached 24 hours per day and 7 days per week, and there is never a fee unless we WIN for you.

Most Common Reasons For Exonerations

In 2018, the National Registry of Exonerations recorded 151 exonerations, with 68 of those being exonerated for homicide. While courts may overturn a wrongful conviction for several different reasons, some of the most common contributing factors for exonerations include: 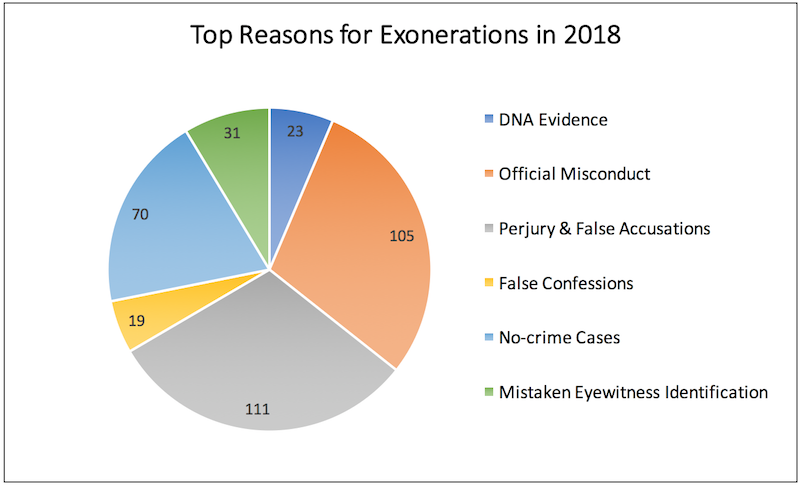 This information is from National Registry of Exonerations for exonerations in 2018.
Please note that often there are multiple reasons for an exoneration and some of the reasons overlap.

The Dietrich Law Firm P.C. is recognized as a Best Law Firm of America and our team strives daily to provide the highest level of legal representation to the people of Western New York. Countless men and women have been robbed of their youth, time with their families and loved ones, their careers and their lives by wrongful convictions. Regretfully, thousands of people are still locked up for crimes they did not commit. After your exoneration, our wrongful conviction attorneys in Buffalo, New York will take immediate action to investigate your wrongful conviction and file a claim to preserve your right to compensation. Contact us today at 716-839-3939 so that we can help you!

In 2017, New York had the fourth most exonerations in the country. On average, victims of wrongful convictions spent over 10 years in prison before their convictions were overturned. Fortunately, New York State has statutes that permit victims of wrongful convictions to seek compensation for any damages suffered as a result of their wrongful imprisonment. For instance, New York’s wrongful conviction recovery statute, which is commonly referred to as Section 8-b of the New York Court of Claims Act, provides legal remedies for victims of injustice in the criminal justice system. Research conducted by the NRE shows that exonerees receive roughly $69,000 for each year they were locked up. While those who prevail in lawsuits recover a median payout of approximately $300,000 for each year behind bars. Please note that these are rough approximations. The actual amount an exoneree is entitled to varies on a case-by-case basis. Call Jed Dietrich, Esq. today at 716-839-3939 for your free consultation and case evaluation.

Nevertheless, some exonerees recover much higher payouts. For instance, a Brooklyn man named Jabbar Collins received $13 Million from New York City and the State of New York after he spent 15 years in a maximum-security prison for a crime he did not commit. After Collins filed a lawsuit under the Unjust Conviction Act, a law that makes recourse available for wrongfully convicted New Yorkers to pursue monetary damages if they can show their innocence with clear and convincing proof. Those wrongly imprisoned, whether due to coerced confessions, witness misidentification, abuse of power or errors in forensic evidence, have the right to be adequately compensated for the grave injustices they have suffered.

Jed Dietrich, Esq. is recognized as a Best Lawyer of America and New York Super Lawyer. Jed Dietrich, Esq. has battled to obtain over $175 Million in verdicts and settlements for people who are injured in Buffalo, New York and beyond, including securing outcomes of $1 Million, or more, in 33 separate cases. If you, or a loved one, were wrongfully convicted of a crime, you may have a legal right to monetary compensation for the damages that you suffered. Contact the Dietrich Law Firm P.C.’s team of highly experienced, aggressive, tenacious and hardworking Buffalo, New York exoneration attorneys today to learn more about your legal rights. We can be reached 24 hours per day and 7 days per week at 716-839-3939. Call us today!