Jed Dietrich, Esq. and His Team of Lawyers and Paralegals at the Dietrich Law Firm P.C., Recognized as a Best Law Firm of America, Fight to Obtain the Best Result for People Who Were Wrongfully Convicted Because of Prosecutorial Misconduct. 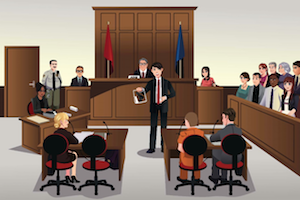 One of the most sacred principles of the American criminal justice system is the presumption of innocence. That is, a defendant is considered innocent until proven guilty, and will not be convicted unless the prosecution can establish the defendant’s guilt beyond a reasonable doubt.

Prosecutors have a great deal of discretion relative to the prosecution of crimes, but they must adhere to certain ethical obligations and afford defendants due process of the law. However, the high burden that prosecutors must meet to secure a guilty verdict places great amounts of pressure on them, and may even tempt some to engage in prosecutorial misconduct.

If you, or a loved one, were a victim of prosecutorial misconduct that resulted in your wrongful conviction, contact Jed Dietrich, Esq. and his top rated team of Buffalo, New York attorneys against prosecutorial misconduct today at 716-839-3939. Every day, Jed Dietrich, Esq. strives to provide the highest level of legal representation to the people of Western New York. Contact the Dietrich Law Firm P.C. today for your free consultation. We are available 24 hours per day and 7 days per week, and there is never a fee unless we WIN for you!

WERE YOU WRONGFULLY CONVICTED BECAUSE OF A PROSECUTOR’S MISCONDUCT IN BUFFALO, NIAGARA FALLS, ROCHESTER OR OTHER PARTS OF NEW YORK STATE?

CALL JED DIETRICH, ESQ. AND HIS TOP RATED AND HIGHLY EXPERIENCED TEAM OF WRONGFUL CONVICTION ATTORNEYS IN BUFFALO, NEW YORK AT 716-839-3939 NOW TO OBTAIN THE HELP THAT YOU NEED!

What Are A Prosecutor’s Ethical Obligations?

Some of these ethical obligations include that a prosecutor must:

If a prosecutor infringed upon your legal rights and their misconduct led to your wrongful conviction, contact the Dietrich Law Firm P.C.’s team of wrongful conviction by prosecutorial misconduct lawyers in Buffalo, New York today. We are dedicated and determined to fight for the justice that you deserve if you were wrongfully convicted in Buffalo, New York; Niagara Falls, New York; Rochester, New York or throughout New York State because of a prosecutor’s misconduct. The Dietrich Law Firm P.C. is recognized as a Best Law Firm of America and our experienced team of lawyers and paralegals will treat you with the respect and compassion that you deserve during this difficult time. Contact us today at 716-839-3939 so that we can help you.

What Is Prosecutorial Misconduct?

In the 1935 case of Berger v. United States, Supreme Court Justice Sutherland described prosecutorial misconduct as a “prosecuting attorney overstepp[ing] the bounds of that propriety and fairness which should characterize the conduct of such an officer in the prosecution of a criminal offense.”

When a prosecutor’s conduct falls outside of the legal and ethical standards that they are bound by, they are engaging in prosecutorial misconduct.

Examples of prosecutorial misconduct include:

If you were imprisoned because a prosecutor engaged in unethical tactics to get a conviction against you, contact the Dietrich Law Firm P.C.’s team of wrongful conviction lawyers in Buffalo, New York today. We are dedicated and determined to fight for the justice that you deserve if you were deprived of your Constitutional rights and were wrongfully imprisoned as a result. Our team of Buffalo, New York personal injury attorneys will fight to get you the best result possible. Contact Jed Dietrich, Esq., recognized as a Best Lawyer of America and New York Super Lawyer, today to find out how he can help you. Call the Dietrich Law Firm P.C. at 716-839-3939 now. We can be reached 24 hours per day and 7 days per week, and there is never a fee unless we WIN for you.