When it comes to road safety, pedestrians are one of the most vulnerable members of the community. This should be of great concern to everyone in Western New York because we are all pedestrians at one point or another. Every time someone crosses the street, takes their dog out for a walk or even checks their mailbox, they are a pedestrian.

Walking anywhere on foot is a riskier activity than it has been in almost the past 30 years because of the greater number of distractions that drivers have on the road. After a pedestrian is struck by a car, truck or SUV, they can suffer serious and life-changing injuries. Furthermore, the loss of a loved one in a pedestrian accident can be especially devastating. As a result of the expensive medical bills, lost wages and reduced capacity to earn income, the long-term consequences of a pedestrian accident on you and your family can be disheartening. The last thing pedestrian accident victims need is to be worried by legal problems.

Insurance companies have paid Jed Dietrich, Esq., recognized as a Best Lawyer of America and New York Super Lawyer, and his top rated team of Buffalo, New York pedestrian accident injury lawyers over $175,000,000.00 in verdicts and settlements to compensate his clients for their serious personal injuries. Call the Dietrich Law Firm P.C., recognized as a Best Law Firm of America, TODAY at 716-839-3939 for a free consultation if you were seriously injured in a pedestrian accident. We are available 24 hours per day and 7 days per week, and there is never a fee unless we WIN for you!

Pedestrian Accident Fatalities are the Highest in Decades

In 2018, the number of pedestrians that were killed throughout America reached a 28-year high. According to the Governors Highway Safety Association (GHSA), 6,277 pedestrians were killed in motor vehicle crashes in 2018, which is a 4% increase since 2017 and a 35% increase from 2008.

Based on research conducted by the Centers for Disease Control and Prevention (CDC), every 8 minutes a pedestrian suffers injuries resulting from a car crash. Pedestrians are nearly 1.5 times more prone to suffer fatal injuries in an accident than occupants of a vehicle. Additionally, a pedestrian gets killed in a vehicle-related accident almost every 1.5 hours.

There are far fewer pedestrian accidents than car accidents every year, yet the survival rate of pedestrians is drastically lower. Pedestrian accidents are estimated to make up 16% of all traffic fatalities in 2018, compared to only 12% a decade ago. Vehicle safety and driver assistance technologies have greatly increased survival rate of drivers and passengers. However, pedestrians continue to be just as vulnerable to suffering severe or deadly injuries after being struck by a vehicle.

New York is one of seven states that averages over 100 pedestrian deaths annually, with the preliminary adjusted data showing 117 deaths in 2018. In 2017, New York was one of just five states that accounted for 43 percent of all pedestrian fatalities.

The New York State Department of Health provided by the following statistics:

If you, or a loved one, were seriously injured in a pedestrian accident, contact Jed Dietrich, Esq. and his aggressive, tenacious and hardworking team of lawyers and paralegals at the Dietrich Law Firm P.C. today at 716-839-3939. We are available 24 hours a day and 7 days a week, and there is never a fee unless we WIN for you. Jed Dietrich, Esq. and his team of highly experienced Buffalo, New York pedestrian accident injury lawyers will battle to obtain the best result for you if you were injured by someone else’s negligence. Call us today so that we can help you!

Recent Trends that Explain the Surge in Pedestrian Deaths 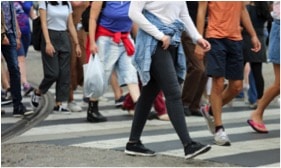 The GHSA contributed the increase in pedestrian deaths to a number of key factors including:

If you, or a loved one, are a pedestrian who was injured by a car, truck or SUV, contact the Dietrich Law Firm P.C., a Best Law Firm of America, today at 716-839-3939. Our team of highly experienced and top rated pedestrian accident lawyers in Buffalo, New York will aggressively and tenaciously fight for the compensation that you deserve for the injuries you suffered. This may include monetary compensation for your medical bills, lost time from work and pain and suffering.

Other Factors that Contribute to Pedestrian Accidents

NHTSA studies looked at both demographic and social considerations in pedestrian accidents and determined the following factors:

WERE YOU, OR A LOVED ONE, INJURED AS A RESULT OF A PEDESTRIAN ACCIDENT WITH A CAR, SUV OR TRUCK IN BUFFALO, NIAGARA FALLS, ROCHESTER OR OTHER PARTS OF NEW YORK STATE?

CALL JED DIETRICH, ESQ. AND HIS TOP RATED AND HIGHLY EXPERIENCED TEAM OF BUFFALO, NEW YORK PEDESTRIAN ACCIDENT LAWYERS AT 716-839-3939 NOW TO OBTAIN THE HELP THAT YOU NEED!