Contact Jed Dietrich, Esq., Recognized as a Best Lawyer of America and New York Super Lawyer, if You or a Loved One Suffered Injuries Caused from a Trench Collapse Accident in Buffalo, New York; Niagara Falls, New York; Rochester, New York or Throughout New York State. 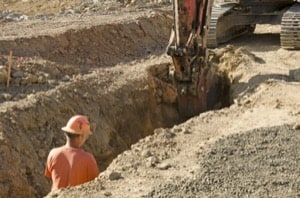 Trenches and excavations are widely used at construction sites. While they are often necessary, they can be incredibly dangerous. Trenches typically range from 3 to 15 feet deep and if they collapse, they can cause serious injuries and even death. In fact, trench collapses are one of the most fatal types of construction accidents. According to the U.S. Bureau of Labor Statistics, 271 workers were killed in trench or excavation collapses between the years 2000 and 2006.

In 2016 alone, trench workers suffered 23 fatalities because of collapses, which is nearly double the average from previous years. The combination of the weight and intense vibrations of the equipment and machinery being used can cause an improperly secured trench to collapse. Trenching companies and contractors do not always follow safety precautions in order to keep workers safe or adhere to standard Occupational Safety and Health Administration (OSHA) protocols. In situations where the proper safety measures are not utilized to prevent trench collapse accidents, workers can be buried alive by soil crashing down on them.

Jed Dietrich, Esq. has exclusively handled serious personal injury cases throughout the United States since 1999. If you, or a loved one, were injured in a trench collapse accident, let Jed Dietrich, Esq. and his team of highly experienced trench collapse accident attorneys in Buffalo, New York handle your case. We will pursue the compensation that you deserve while you and your family focus on what matters most—your recovery. Every day the Dietrich Law Firm P.C. strives to provide the highest level of personal injury service to people who suffered injuries because of someone else’s negligence in Western New York.

Insurance companies have paid Jed Dietrich, Esq. and his elite team of trench collapse accident lawyers in Buffalo, New York over $175,000,000.00 in verdicts and settlements to compensate his clients for their serious injuries. Call the Dietrich Law Firm P.C., recognized as a Best Law Firm of America, TODAY at 716-839-3939 for a free consultation. We are available 24 hours per day and 7 days per week, and there is never a fee until we WIN for you!

There are usually no warning signs before a trench rapidly collapses, causing soil to pour into the trench at high speeds and with heavy force. In most cases, such collapses can bury and crush unsuspecting workers. Some of the most common types of trench collapses include:

If you were seriously injured in a trench collapse accident, contact the Buffalo, New York trench and excavation collapse accident lawyers at the Dietrich Law Firm P.C. today. Jed Dietrich, Esq. is recognized as a Best Lawyer of America and a New York Super Lawyer and he is determined to get you the best possible result for your injuries. Contact the Dietrich Law Firm P.C. today at 716-839-3939 for more information.

Trench and excavation worksites can be incredibly dangerous. Soil can weigh more than 3,000 pounds per cubic yard, which is the equivalent of being buried under a small car. When vital safety precautions are overlooked by negligent or careless managers or contractors, thousands of pounds of soil can easily come crashing down on workers in the trench. According to OSHA research, trench and excavation related deaths are 112% higher than general construction deaths. Trench workers are often vulnerable to suffering any of the following injuries, or a combination of the same:

If you, or a loved one, were injured in a trench collapse accident, you need the best personal injury lawyer in Buffalo, New York to fight for the compensation you deserve. Jed Dietrich, Esq. and his team of top rated trench collapse accident attorneys in Buffalo, New York are aggressive, tenacious and hardworking and will fight for the maximum compensation possible for your injuries. Contact us today at 716-839-3939. 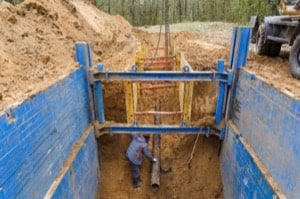 Executing trench work safely involves thorough attention to the structural integrity of the trench and the implementation of specialized safety gear and precautions. Trenching site supervisors are obligated by New York State and federal law to provide safety equipment for employees working in and around trenches. Most serious injuries and fatalities resulting from trench cave-ins can be avoided if the appropriate safety measures are taken.

If you were injured in a preventable trench collapse accident, you may have a claim for compensation. Although workers in New York are usually not allowed to pursue a personal injury claim against their employers, third party contractors and subcontractors can be held liable for their negligence and any contributing factors that led to the accident.

The victim of a trench collapse accident is required to prove that they were injured as a result of the negligence of another party in order to recover damages for any injuries suffered. Negligence claims can be filed when an accident occurs resulting from conditions or conduct that should have been prevented. Many trench collapses result from violations of OSHA regulations. OSHA violations may be used to demonstrate negligence against a liable third-party. Additionally, property owners and contractors can be held strictly liable for particular violations of New York safety regulations and labor laws. Such claims can be pursued in conjunction with or independently of your Workers’ Compensation claim.

DID YOU, OR A LOVED ONE, SUFFER A TRENCH COLLAPSE INJURY IN BUFFALO, NIAGARA FALLS, ROCHESTER OR OTHER PARTS OF NEW YORK STATE?

CALL JED DIETRICH, ESQ. AND HIS TOP RATED AND HIGHLY EXPERIENCED TEAM OF BUFFALO, NEW YORK TRENCH COLLAPSE INJURY ATTORNEYS AT 716-839-3939 NOW TO OBTAIN THE HELP THAT YOU NEED!