Jed Dietrich, Esq., Established as an American Institute of Trial Lawyers Litigator of the Year and New York Super Lawyer, and His Team of Veteran Lawyers at the Dietrich Law Firm P.C. Battle to Obtain the Highest Damages for Victims of Auto Accidents Caused by Failing to Stop for School Buses in Buffalo, New York. 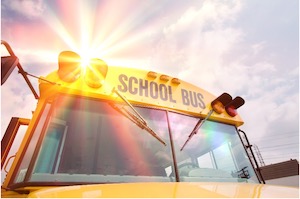 Every day, more than 24 million children ride school buses throughout the United States. In recent years, accidents involving school buses have dramatically increased. Many of these crashes are caused by other drivers failing to stop for school buses. It is shocking how many drivers recklessly drive past school buses, stopped, with their red flashing lights on. It is not only against the law to do so, but it places the lives of innocent children in serious jeopardy. Unfortunately, not stopping for a school bus can result in severe injuries and even fatalities to children on their way to or from school. The greatest threat to kids is not riding the bus itself but when boarding or getting off of their school buses.

Our seasoned personal injury lawyers have seen the heart-breaking consequences of school bus accidents, especially those involving young children being struck by cars. Every driver needs to realize that the biggest penalty for failing to stop for a school bus is not the traffic ticket but the potentially devastating aftermath of seriously injuring or even killing a child. According to the National Highway Traffic Safety Administration (NHTSA), between 2007 to 2016, school bus-related accidents killed over 1,280 victims. Nobody, especially young children, should be forced to bear the physical, emotional, and psychological traumas of another’s recklessness. If you, or your child, were critically injured in a crash caused by another’s failure to stop for the school bus, you owe it to yourself to talk to a highly experienced personal injury attorney. Pursuing a personal injury claim against those responsible for the accident may be the best way to start putting your life back together.

Jed Dietrich, Esq., an eminent member of the Premier Lawyers of America, understands the agony and grief that accident victims and their parents may suffer after being critically injured. Jed Dietrich, Esq. and his battle-tested team of attorneys, have fought to obtain over $175 million in verdicts and settlements for injured victims in Buffalo, New York, and beyond. We are the aggressive, tenacious, and hardworking personal injury attorneys who are ready to fight for the compensation that your child deserves! Please see our Google 5 Star rating and clients’ testimonials by clicking here. Our top rated team is available 24 hours per day and 7 days per week at (716) 839-3939 or by completing the online consultation form. 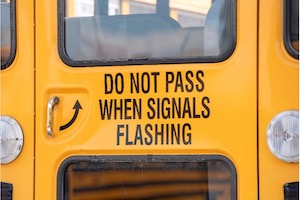 According to New York law, drivers should not proceed until the children are safely off the road and the bus’s red lights stop flashing after stopping for a school bus.

WAS YOUR CHILD SERIOUSLY INJURED IN AN ACCIDENT CAUSED BY A RECKLESS DRIVER CRASHING INTO THEIR STOPPED SCHOOL BUS IN BUFFALO OR OTHER PARTS OF NEW YORK STATE?

CALL JED DIETRICH, ESQ. AND HIS TOP RATED AND HIGHLY EXPERIENCED TEAM OF BUFFALO, NEW YORK FAILURE TO STOP FOR A SCHOOL BUS ACCIDENT INJURY LAWYERS AT (716)-839-3939 NOW TO GET THE REPRESENTATION THAT YOU DESERVE!

Children are safest when accidents happen while they are on the bus. However, getting on and off the bus can be a treacherous task. Sadly, countless young, innocent lives have been tragically stolen because drivers neglected to stop for school buses. The number one priority for parents and bus drivers should always be children’s safety. Although some bus accidents are unavoidable, parents can keep their children safe by teaching them the following:

Any serious injury involving a family member can be unsettling, but having your child injured is especially heartbreaking. If your child has been injured because someone failed to stop for their school bus, contact the battle-tested Buffalo, New York bus accident injury attorneys at Dietrich Law Firm P.C. For over two decades, Jed Dietrich, Esq., a proud member of the Million Dollar Advocates Forum, has exclusively handled serious personal injury cases, including many school bus accidents. You can always count on our highly experienced lawyers to help you navigate the system. The parents or legal guardians of injured children can pursue a personal injury lawsuit on their child’s behalf to recover compensation. Jed Dietrich, Esq. and his elite team would be honored to discuss your case in further detail. Our outstanding attorneys are available twenty-four-seven at (716) 839-3939 or by completing the online consultation form.