Jed Dietrich, Esq., Renowned as a Top 3 Personal Injury Lawyer in Buffalo  and New York Super Lawyer, and His Team of Uncompromising, Persistent, and Diligent Lawyers at the Dietrich Law Firm P.C., Recognized as a Best Law Firm of America, Litigate to Obtain Unrivaled Outcomes for Victims Who Have Developed Parkinson’s Disease Caused by Paraquat Exposure in Buffalo, New York. 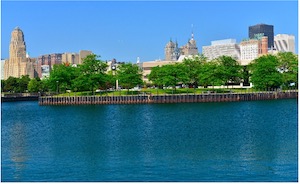 In 2017, the United States Environmental Protection Agency (EPA) substantially changed the circumstances under which paraquat could be bought, mixed, and sprayed on crops. Although the “restricted-use pesticide” can only be applied commercially by licensed applicators today before anybody could mix and spray paraquat as long as they were doing so under the direction of a certified applicator. Prior lack of adequate regulations led to tens of thousands of agricultural laborers, many without proper training or certification, mixing and applying paraquat for decades. Further, many farmers and families living around farms were unintentionally exposed to the toxic chemical. According to several medical publications, victims who have been repeatedly exposed to paraquat have up to a 600% increased risk of developing Parkinson’s disease.

Even certified applicators and individuals with restricted use licenses were unaware of paraquat’s dangers because manufacturers, such as Syngenta, never included Parkinson’s warnings on their labels. Despite the known hazards of paraquat, the weed killer is one of the most widely used herbicides across the United States. Each year, roughly 11 million pounds of the substance are sprayed on crops. If you are looking for an attorney to take your paraquat-related illness claim, it is crucial to ensure that he or she has enough experience to build a strong case. Jed Dietrich, Esq., an eminent member of the Premier Lawyers of America, has assisted thousands of clients throughout the country by providing the best possible legal representation to victims who need it the most. With over 22 years of experience, Jed Dietrich, Esq. has the expertise and verified results to demand the compensation that his clients need and deserve.

The Dietrich Law Firm P.C.’s seasoned personal injury lawyers have seen the heart-breaking consequences of toxic exposure illnesses, especially those who suffer severe neurological diseases. Nobody should be forced to bear the physical, emotional, psychological traumas brought on by reckless herbicide manufacturers. With the firm’s vast resources and elite reputation, our battle-tested attorneys will hold the responsible corporation liable for their gross negligence and indifference. Kindly see our Justia 10.0 Lawyer Rating and clients’ testimonials by clicking here. Pursuing a product liability claim against those responsible for your Parkinson’s disease may be one of the most important things you ever do. The Dietrich Law Firm P.C.’s paraquat sickness attorneys understand the agony and despair that toxic exposure victims and their families may suffer after falling critically ill. Jed Dietrich, Esq. and his best of the best team of attorneys have aggressively litigated to obtain over $175 million in verdicts and settlements for clients who were injured in Buffalo, New York, and beyond. What are you waiting for? Our aggressive, tenacious, and hardworking team is available twenty-four-seven at (716) 839-3939 or by completing the online consultation form. Retain our leading personal injury attorneys to start demanding the compensation that you deserve today!

Who Might Have Been Exposed to Paraquat and How?

Paraquat exposure can come from various sources. If you were unfortunate enough to develop Parkinson’s disease after exposure to the deadly chemical, you might be eligible for compensation. Exposure to paraquat typically occurs in the following ways:

WERE YOU, OR A LOVED ONE, DIAGNOSED WITH PARKINSON’S DISEASE AFTER BEING CARELESSLY EXPOSED TO PARAQUAT IN BUFFALO, CHEEKTOWAGA, TONAWANDA, WEST SENECA, OR OTHER PARTS OF NEW YORK STATE?

CONTACT JED DIETRICH, ESQ. AND HIS TOP RATED AND HIGHLY SKILLED TEAM OF BUFFALO, NEW YORK PARAQUAT ILLNESS ATTORNEYS AT (716)-839-3939 NOW TO RETAIN THE HELP THAT YOU DESERVE!

Buffalonians suffering from Parkinson’s disease are fortunate enough to have some of the country’s finest hospitals for diagnosis, treatment, and support. Kaleida Health’s Parkinson’s Disease Comprehensive Movement Disorder Center has been designated as an official “Outreach Center” by the National Parkinson’s Foundation. Kaleida’s team of fellowship-trained Parkinson’s experts specialize in treating patients with functional movement disorders. The center offers the most current surgical procedures and medical treatments available, including deep brain stimulation. New patient evaluations for Parkinson’s disease include:

Additionally, each month, the Parkinson’s Wellness Group of Western New York meets on the third Wednesday. The group offers various services, such as speech pathology, caregiver training, and nursing support.

The Dietrich Law Firm P.C.’s leading lawyers know exactly how to litigate your paraquat exposure claim. You can count on our veteran team to zealously battle to obtain the best possible result for your progressive degeneration disorder. If you have any questions regarding your potential lawsuit, please feel free to call Jed Dietrich, Esq. Jed Dietrich, Esq. and his elite team would be honored to discuss your case in further detail. You can reach our seasoned team by dialing (716) 839-3939 or by completing the online consultation form. Our highly experienced paraquat-related Parkinson’s disease attorneys are available 24 hours per day and 7 days per week. There is never a fee unless we WIN for you!