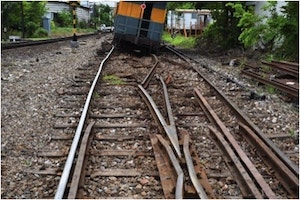 On September 13, 2001, the Plaintiff, 21-year-old Derek Boland, sustained serious bodily injuries as a result of a rollover accident. At the time of the accident, Mr. Boland was a passenger in a vehicle being driven by Steven Brown. When the vehicle being driven by Mr. Brown was crossing over a set of railroad tracks on Berry Road in Pomfret, the driver lost control. The vehicle went airborne and eventually landed on its hood—slamming into a tree. Mr. Boland was consequently ejected out of the vehicle. Tragically, the forceful impact of the collision killed the driver.

As a result of the collision and ejection, Mr. Boland fractured his pelvis and suffered injuries to the nerve in his right leg, resulting in deep vein thrombosis and loss of feeling below the region of his right calf. Mr. Boland underwent surgical intervention to repair his fractured pelvis and required the placement of a Greenfield Vena Cava filter in his neck for the deep vein thrombosis. Deep vein thrombosis is a serious medical condition that occurs when a blood clot forms in a vein located deep inside your body, typically in one of the legs. A Greenfield Vena Cava filter is a device that traps blood clots and prevents them from traveling towards the heart and lungs.

Jed Dietrich, Esq. aggressively fought to obtain a settlement of $700,000 in compensation for Mr. Boland’s injuries by suing the owner of the vehicle, Glenna Brown; the owner of the railroad tracks, Norfolk Southern Railroad Company; the railroad’s corporate aliases, Norfolk Southern Corporation and Norfolk and Western Railway Company; and the County of Chautauqua and the Town of Pomfret. Jed Dietrich, Esq. argued that Mr. Boland’s injuries were caused by Mr. Brown’s negligent operation of the vehicle combined with negligent maintenance of the railroad tracks and potholes between the tracks on Berry Road that caused Mr. Brown to lose control of the vehicle.

The defense attorneys on this case argued that Mr. Brown was driving recklessly and that he alone was the cause of the collision, rather than the condition of the railroad tracks. The defense brought forward information advising that Mr. Brown was traveling around 70 miles per hour in a 55 mile per hour zone with a 15 mile per hour advisory speed limit. Additionally, the defense discounted the injuries sustained by Mr. Boland and stated that his injuries to his legs were more a result of his weight than the collision.

Jed Dietrich, Esq. successfully maintained his argument against all of the defendants by claiming that Mr. Brown was negligent in his operation of the vehicle, but had it not been for the potholes on the railroad tracks, Mr. Brown may not have lost control of his vehicle and the collision may not have occurred.

WERE YOU, OR A LOVED ONE, INJURED AS A RESULT OF A NEGLIGENTLY MAINTAINED RAILROAD TRACK IN BUFFALO, NIAGARA FALLS, ROCHESTER OR OTHER PARTS OF NEW YORK STATE?

CALL JED DIETRICH, ESQ. AND HIS AGGRESSIVE, TENACIOUS AND HARDWORKING TEAM OF BUFFALO, NEW YORK NEGLIGENTLY MAINTAINED RAILROAD TRACK LAWYERS AT (716) 839-3939 TODAY FOR THE HELP THAT YOU NEED!