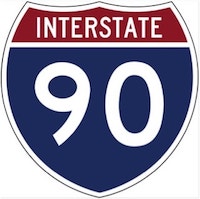 On December 3, 2001, twenty-five-year-old Yancey Matos was driving northbound on Interstate-90 in Buffalo, New York near the Scajaquada exit. Traffic was heavy and Mr. Matos came to a stop in his vehicle. While stopped, Mr. Matos was suddenly rear-ended by a vehicle driven by the defendant, Perry Morrison. As a result of the forceful collision, Mr. Matos sustained injuries to his low back.

Jed Dietrich, Esq. pursued Mr. Matos’ claim by filing a personal injury lawsuit against the driver that caused the collision, Perry Morrison. The lawsuit alleged that Mr. Morrison was negligent in the operation of his vehicle, having failed to stop prior to coming into contact with Mr. Matos’ vehicle. In addition, Jed Dietrich, Esq. also sued the owner of the vehicle Mr. Morrison was operating, Chrysler Financial Company LLC, and the vehicle’s lease owner, Windsor Apartments. New York Vehicle and Traffic Law § 388 states that every owner of a vehicle shall be liable for injuries resulting from the negligence in operation of their vehicle by a person operating the vehicle with permission. That is, if a person lends their vehicle to someone else, they can be held liable for any accidents that result from the use of their vehicle. As such, Jed Dietrich, Esq. named as defendants all of the people and entities which could potentially be found responsible for the injuries that Mr. Matos sustained.

Following the accident, Mr. Matos was in pain and sought emergency room treatment at Buffalo General Hospital. There, through physical examination and diagnostic imaging, it was determined that Mr. Matos suffered a L5-S1 disc herniation in his low back. Click here for more information about what a disc herniation is, its causes and common types of treatment for a disc injury.

The defense attempted to argue that Mr. Matos’ injuries were related to a degenerative spine condition that predated the accident. A degenerative spine condition refers to symptoms of pain that are caused by regular wear-and-tear on the spine as a person ages. Despite the defense’s efforts to argue that Mr. Matos’ injuries were not related to the motor vehicle collision, Jed Dietrich, Esq. successfully battled to secure a $1,350,000.00 settlement for Mr. Matos’ past and future pain and suffering. This settlement was reached under the guidance of the Honorable Frank A. Sedita, Jr.

WERE YOU, OR A LOVED ONE, INJURED AS A RESULT OF BEING REAR-ENDED ON INTERSTATE-90 OR ANOTHER NEW YORK STATE THRUWAY?

CALL JED DIETRICH, ESQ. AND HIS AGGRESSIVE, TENACIOUS AND HARDWORKING TEAM OF BUFFALO, NEW YORK REAR-END CAR ACCIDENT LAWYERS AT (716) 839-3939 NOW TO OBTAIN THE HELP THAT YOU NEED!