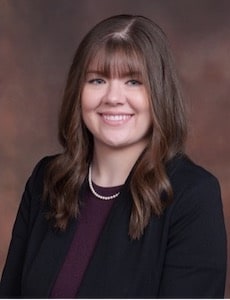 Ms. Postek is a civil litigation attorney who focuses her practice on representing people who were injured because of someone else’s negligence. As a personal injury attorney, Ms. Postek devotes each day to advocating for her injured clients and battling big insurance companies to get her clients the compensation they deserve.

Ms. Postek has been a member of the Dietrich Law Firm P.C. team since 2013, when she began working as a file clerk. Over the years, Ms. Postek was promoted within the firm and gained invaluable exposure to every aspect of litigating a personal injury case—from the opening of a client’s file, to preparing demand packages for settlement negotiations, to preparing documents and exhibits for trial. Years of mentoring by Jed Dietrich, Esq. has equipped Ms. Postek with the skillset necessary to provide the highest level of personal injury service to every client.

While in law school, Ms. Postek focused much of her coursework on developing her mediation and negotiation skills. Ms. Postek represented her law school in the IBA-VIAC CDRC Vienna Mediation and Negotiation Competition held in Vienna, Austria, as well as the ABA Regional Representation in Medication Competition held in Baltimore, Maryland. Additionally, Ms. Postek served as a student mediator for the law school’s Mediation Clinic and worked as a teaching assistant for the Mediation Theory & Practice course.

In addition to her academic work, throughout law school Ms. Postek worked as a law clerk for the Dietrich Law Firm P.C. During her years as a law clerk, Ms. Postek further developed her research and writing skills, gained exposure to various legal proceedings, and trained under top rated personal injury attorneys.

Ms. Postek believes that to be successful in the practice of law you must have excellent attention to detail, a strong work ethic, and a genuine passion for helping others. Employing these principles, Ms. Postek strives daily to provide her clients with the highest level of personal injury service.

Ms. Postek has seen firsthand the lifechanging impact that an accident can have on someone’s life. In the aftermath of an accident, an injury victim is often faced with many questions and challenges, which can be overwhelming and frightening to face alone. Ms. Postek works with her clients to assist them through the challenges they face by treating them the way she would like to be treated—with care, respect, and compassion.

If you were injured because of someone else’s negligence, Ms. Postek is ready to tell your story and fight for the compensation that you deserve.

When not in the office or the courthouse, Ms. Postek can be found camping with her family, experimenting with a new baking recipe, enjoying a country concert, walking along local trails, or practicing at the driving range.