Jed Dietrich, Esq., Celebrated as a Best Attorney of America and Attorney and Practice Magazine’s Top 10 Personal Injury Attorney, and His Seasoned Team of Lawyers at the Dietrich Law Firm P.C. Aggressively Litigate to Demand the Finest Results for Victims of Cell Phone Car Crashes in Rochester, New York, Throughout Monroe County, and Beyond. 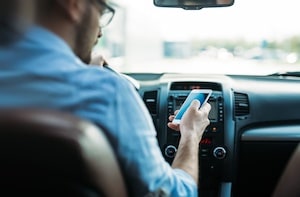 Using a cell phone behind the wheel is a high-risk activity that has a substantial impact on traffic safety. According to a recent report from the National Safety Council (NSC), cell phone use while driving results in over 1.6 million car accidents every year. At least 28 percent of all collisions in the United States are caused by drivers using cell phones. Anything that steals a driver’s attention away from the road, even for a few seconds, is extremely dangerous. Consequently, driving while distracted considerably augments the risk of being involved in a preventable collision. Studies have revealed that there is no major difference between the cognitive distraction of hand-held and hands-free devices. Far too many victims suffer severe injuries and even fatalities in accidents caused by motorists on cell phones.

Of all the activities related to cell phones, texting while driving is undoubtedly the most dangerous. A driver that is texting is 6 times more likely to cause an accident than a drunk driver. This is because the average texting driver’s eyes are off the road 400 percent longer than non-texting motorists. Additionally, each time a driver looks at his or her phone and then back at the road, they have to reorient themselves. Suppose that you, or a loved one, were hit by a driver who was on their cell phone. In that case, you owe it to yourself to retain a highly experienced personal injury attorney to fight for the compensation that you deserve. Pursuing a lawsuit against the negligent driver may provide you with the best opportunity to get back on your feet again. The Dietrich Law Firm P.C.’s elite team would be honored to fight for you every step of the way.

With over 23 years of exclusively litigating for victims of tragic accidents, Jed Dietrich, Esq., a prominent member of the National Trial Lawyers Top 100, has successfully tried and negotiated numerous cell phone car accident cases. Jed Dietrich, Esq. and his veteran team of Rochester, New York attorneys have fought more than 100 cases to verdict and surpassed $175,000,000 in compensation for clients. Jed Dietrich, Esq.’s highest priority is to obtain the money that you deserve for all your economic and non-economic damages, such as hospital bills, lost earnings, loss of consortium, permanent disfigurement, pain and suffering, life-long disability, physical therapy, and much more. The Dietrich Law Firm P.C., recognized as a Best Law Firm of America, is available every day of the week by dialing 585-939-3939 or by filling out our online consultation form. 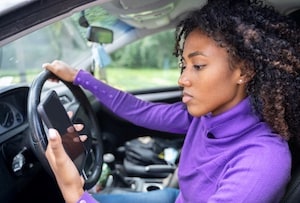 It is estimated that over 100 million Americans use their cell phones behind the wheel. Zendrive, a driving analytics company, found that drivers are using their phones on 88 percent of their trips. Cell phones significantly interfere with a driver’s ability to focus because they involve 3 types of distraction. Using the phone takes your mind off driving, your hands off the steering wheel, and your eyes off the road, all at the same time. As a result, motorists who use cell phones are 4 times more likely to be in a collision. Some instances of irresponsible driving caused by phone usage include:

DID YOU, OR A RELATIVE, SUFFER CRITICAL INJURIES IN A CAR ACCIDENT CAUSED BY SOMEONE USING THEIR CELL PHONE IN ROCHESTER, MONROE COUNTY OR OTHER PARTS OF NEW YORK STATE?

CALL JED DIETRICH, ESQ. AND HIS TOP RATED AND SEASONED TEAM OF ROCHESTER, NEW YORK, CELL PHONE CRASH INJURY LAWYERS AT 585-939-3939 TODAY TO GET THE HELP THAT YOU DESERVE!

According to the National Highway Traffic Safety Administration (NHTSA), in a recent year alone, more than 3,140 victims suffered fatal injuries in car accidents involving distracted drivers. Sadly, if drivers had just paid more attention to the road, many of these crashes could have easily been avoided. Almost everyone has at least glanced at their cell phone while driving. Nevertheless, fighting the temptation to use your phone behind the wheel can be significantly minimized by implementing some modest changes in behavior. Some tips include:

Reducing your phone use while driving will allow you to dedicate more attention to the road and reach your destination safely. Although the Dietrich Law Firm P.C.’s leading lawyers trust that our advice will help you drive more carefully, it is impossible to predict the actions of other drivers. Unfortunately, even if you are extremely cautious, there is still no guarantee that a negligent motorist will not cause an accident.

The Dietrich Law Firm’s team of highly experienced Rochester, New York, cell phone car accident attorneys refuse to let someone else’s carelessness or distraction destroy your way of life. Over and over again, clients of the Dietrich Law Firm P.C. have declared that Jed Dietrich, Esq. is the best and brightest personal injury lawyer in New York State. Please contact us for your free, no-obligation case evaluation. We are available twenty-four-seven by calling 585-939-3939 or by completing our online consultation form.

Call the Dietrich Law Firm P.C. immediately at 585-939-3939 so that our aggressive, tenacious and hardworking personal injury lawyers can fight to obtain the best result for your personal injury claim in Rochester, New York. We are available 24 hours a day, 7 days a week, and there is never a fee until we WIN for you!