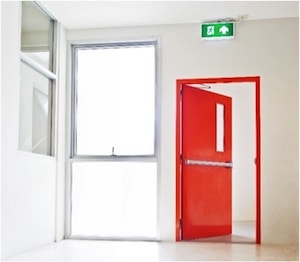 On September 2, 2000, Ms. Denise Hunt was working at Holland Central School as a self-employed cleaner. While working, she grabbed the handle of a recently installed fire door in an attempt to open the door, which then caused it to fall onto her. The fire door that was recently installed during a renovation project weighed approximately 150 to 200 pounds. As a result of the door falling on her, Ms. Hunt’s spine was crushed. Ms. Hunt suffered several disc herniations in her neck and back and also suffered a head injury. Following the incident, Ms. Hunt required four surgeries to her spine in a three year time span and suffered a 40% reduced range of motion in her spine which prevented her from being able to return to work.

It was argued by the defense team that Ms. Hunt was negligent by not noticing that the door was not properly secured and that she was liable for her own injuries. However, Jed Dietrich, Esq. successfully rebutted that argument and claimed that Paragon Northeast, the general contractor for the renovation project, was responsible for creating the dangerous condition of an unsecured door and should be held liable for Ms. Hunt’s injuries.

The fire door that fell on Ms. Hunt was extremely heavy and caused her severe injuries. Notably, Ms. Hunt suffered disc herniations in her back at the L4-L5 and L5-S1 levels and disc herniations in her neck at the C3-C4, C4-C5, C5-C6 and C6-C7 levels. As a result of these injuries, Ms. Hunt required multiple surgeries. Ms. Hunt’s surgeries included a two-level anterior cervical discectomy, which required the cutting out of the damaged discs from the front of the neck through her throat area. Ms. Hunt also required a fusion of the discs in her thoracic spine at the T3, T4 and T5 levels and in her cervical spine at the C3, C4, C5, C6 and C7 levels. In addition, Ms. Hunt required a three-level posterior discectomy to remove the posterior portions of three cervical discs and a replacement of her L4-L5 and L5-S1 discs.

To prove Ms. Hunt’s injuries, Jed Dietrich, Esq. used the assistance of an expert witness. An expert witness is a person who is deemed to be an expert on a subject matter because of their education, training, certification, skills or experience, and whose opinion may be offered in court in light of their education, training, certification, skills or experience. Dr. William Capicotto, an orthopedic surgeon, was considered an expert witness and his opinion was used to support the extent of Ms. Hunt’s injuries and their causal relationship to the incident.

As a result of Jed Dietrich, Esq.’s aggressive and tenacious pursuit, Ms. Hunt obtained a settlement of $2,150,000 for her pain and suffering that resulted from the September 2, 2000 incident.

WERE YOU, OR A LOVED ONE, INJURED AS A RESULT OF A BUILDING CONTRACTOR’S NEGLIGENCE IN BUFFALO, NIAGARA FALLS, ROCHESTER OR OTHER PARTS OF NEW YORK STATE?

CALL JED DIETRICH, ESQ. AND HIS TOP RATED AND HIGHLY EXPERIENCED TEAM OF BUFFALO, NEW YORK NEGLIGENT RENOVATION INJURY LAWYERS AT (716) 839-3939 NOW TO OBTAIN THE HELP THAT YOU NEED!