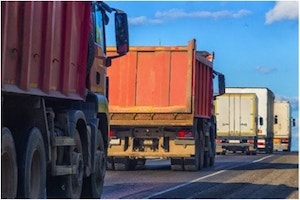 On November 22, 2004, Plaintiff Anthony Ramos was rear-ended by Andrew Stewart while headed north on Interstate 190 in Buffalo near the Church Street exit. Both Mr. Ramos and Mr. Stewart pulled to the side of the road after the collision. Mr. Ramos was later advised by the responding officer to move his vehicle to leave room for the tow truck to remove Mr. Stewart’s vehicle from the scene. As Mr. Ramos walked back towards the officer, on the shoulder of Interstate 190, a truck driven by David Booth, while working for Modern Disposal Services, Inc., struck the police officer’s vehicle and forced the vehicle into Mr. Ramos—crushing his left foot. Mr. Ramos, a 62-year-old retired man, underwent 4 surgeries to repair the damage done to his foot. Mr. Ramos also suffered a whiplash injury to his neck as a result of the initial collision.

Jed Dietrich, Esq., a Buffalo, New York serious personal injury attorney, represented Mr. Ramos and aggressively and tenaciously fought to obtain a settlement of $2,025,000 for Mr. Ramos for his injuries sustained as a result of the above-mentioned collisions. Mr. Stewart argued that he was not liable for the injuries sustained to Mr. Ramos’s foot because he was not at fault for the collision that forced the police car to hit Mr. Ramos. Jed Dietrich, Esq. successfully rebutted this argument by pointing out that Mr. Stewart caused the initial collision by not keeping a proper lookout for the traffic conditions ahead of him and had that collision not occurred, Mr. Ramos would not have been on the side of Interstate 190 and consequently struck by the police vehicle. It was also discovered that Mr. Stewart was given a court-appearance ticket for driving under the influence of prescription medication and was convicted of this offense.

Mr. Booth argued that he was not liable for the collision because the police car was in his lane of travel and he was not able to avoid the collision. Jed Dietrich, Esq. favorably rebutted this argument by pointing out that Mr. Booth also did not keep a proper lookout for the traffic conditions and should have been able to anticipate and avoid the police car that was sticking out into traffic, attending to the previous collision.

In addition to the arguments presented above, Jed Dietrich, Esq. was able to use three expert witnesses to assist in proving the injuries and causation relative to this case. An expert witness is a person who is permitted to testify at a trial because of special knowledge or proficiency in a particular field that is relevant to the case. Dr. John Ring, Dr. Thomas Denecke and Dr. Christopher Ritter were the three experts that were able to support Mr. Ramos’ case.

With the use of the above arguments and the expert witnesses, Jed Dietrich, Esq. was able to obtain $25,000, the maximum amount, from Mr. Stewart’s insurance company and $2,000,000 from the insurance company of Mr. Booth’s employer, Modern Disposal Services, Inc., as compensation for Mr. Ramos’ injuries that resulted from the November 22, 2004 collisions.

WERE YOU, OR A LOVED ONE, INJURED BECAUSE OF A MODERN DISPOSAL TRUCK IN BUFFALO, NIAGARA FALLS, ROCHESTER OR OTHER PARTS OF NEW YORK STATE?

CALL JED DIETRICH, ESQ. AND HIS TOP RATED AND HIGHLY EXPERIENCED TEAM OF BUFFALO, NEW YORK MODERN DISPOSAL TRUCK ACCIDENT LAWYERS AT (716) 839-3939 NOW TO OBTAIN THE HELP THAT YOU NEED!