38 TIMES INSURANCE COMPANIES HAVE PAID JED DIETRICH, ESQ. $1 MILLION DOLLARS OR MORE
Home
Cases of Note
$1,900,000 Settlement for a 42-Year-Old Driver and His 36-Year-Old Passenger After Being Rear-Ended by a Tractor-Trailer in Amherst, New York

$1,900,000 Settlement for a 42-Year-Old Driver and His 36-Year-Old Passenger After Being Rear-Ended by a Tractor-Trailer in Amherst, New York 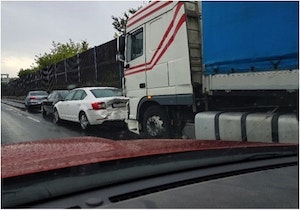 On October 29, 2002, Patrick Long was driving himself and his passenger, John Ryan, eastbound on the Interstate-290 in Amherst, New York. The two men found themselves in heavy traffic when a tractor-trailer unexpectedly collided with the back of their vehicle. As a result of the collision, Mr. Long and Mr. Ryan each required surgery to their necks and missed time from their work as masons.

Following the collision, Mr. Long and Mr. Ryan sought the assistance of an experienced Buffalo, New York personal injury attorney to pursue the compensation that they deserved for their injuries. Jed Dietrich, Esq. pursued compensation for Mr. Long and Mr. Ryan by filing a lawsuit in the United States District Court for the Western District of New York. The lawsuit named as defendants the driver of the tractor-trailer, Carl Cooper; Mr. Cooper’s employer, K-DAC Expedite; and the tractor-trailer’s lease owner, Pollock NationaLease. The Complaint alleged that Mr. Cooper was negligent in the operation of the tractor-trailer and that K-DAC Expedite and Pollock NationaLease were vicariously liable for Mr. Cooper’s negligent actions.

As a result of the collision, Mr. Long and Mr. Ryan both sustained serious neck injuries and required cervical fusion surgeries. A cervical fusion is a surgical procedure that links together, or fuses, the damaged segments of the vertebral column in the neck. Mr. Long and Mr. Ryan’s physicians opined that their injuries and need for neck surgeries were causally related to the October 29, 2002 collision.

In addition to Mr. Long and Mr. Ryan’s injury claims, Jed Dietrich, Esq. presented a loss of services claim on behalf of Mrs. Long and Mrs. Ryan. A loss of services claim is commonly brought by the spouse of an injured person against the defendants for loss of their right to benefit from the performance of duties, such as household chores, and companionship as a result of the injury to their spouse.

The defense team presented multiple arguments against Mr. Long and Mr. Ryan’s claim. The defendants presented a sudden emergency defense, arguing that Mr. Cooper was not able to prevent the accident was because Mr. Long abruptly stopped in traffic in front of him. This defense proved unsuccessful. In addition, the defendants argued that Mr. Long’s neck injury pre-dated the accident and that he was able to return to sedentary work. Lastly, the defense team argued against Mr. Ryan’s claim by asserting that his surgery successfully healed his injuries and he was able to return to full-time employment.

Jed Dietrich, Esq. utilized the expert witness opinions provided by Dr. Cameron Huckell, an orthopedic surgeon, and Dr. Loubert Suddaby, a neurosurgeon, to support a finding that Mr. Long and Mr. Ryan’s injuries were related to the subject collision and to illustrate the extent of their significance.

Through an aggressive and tenacious pursuit of compensation for his clients, Jed Dietrich, Esq. successfully obtained a structured settlement of $1,900,000 for Mr. Long and Mr. Ryan. The two men were to each receive $950,000. The structured settlement is expected to have a total payout value of $2,785,079 over the course of its lifetime. A structured settlement is a negotiated financial arrangement in which a claimant agrees that they will receive part or all of their settlement in the form of periodic payments on an agreed upon schedule, instead of one lump sum payment.

WERE YOU, OR SOMEONE YOU LOVE, REAR-ENDED BY A TRACTOR-TRAILER, BIG RIG, EIGHTEEN-WHEELER OR SEMI-TRUCK IN NEW YORK STATE?

CALL JED DIETRICH, ESQ. AND HIS AGGRESSIVE AND TENACIOUS TEAM OF REAR-END TRACTOR-TRAILER ACCIDENT ATTORNEYS TODAY AT (716) 839-3939 FOR THE HELP THAT YOU NEED TO GET THE COMPENSATION THAT YOU DESERVE!