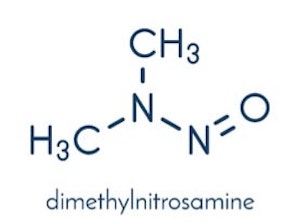 NDMA (N-Nitrosodimethylamine), also referred to as DMN (dimethylnitrosamine) is an environmental contaminant that can form naturally or through a number of chemical or industrial processes. The contaminant is commonly found in household and cosmetic products like shampoo, laundry detergent and dishwashing soap. NDMA is found in cigarette smoke, chewing tobacco and the interior air of cars. Additionally, water and foods that contain various levels of NDMA include dairy products; cured, grilled, and smoked meats (especially bacon); fish; and vegetables.

Based on statements from the Environmental Protection Agency (EPA), NDMA is only used in the United States for research purposes. In cancer research, NDMA is commonly used to induce carcinogenesis in laboratory rats. The chemical is also a byproduct of numerous manufacturing industrial processes such as gasoline refining, pesticide production, hide tanning, rubber production and tire manufacturing. Moreover, the chlorination used to purify drinking and wastewater at treatment plants can inadvertently generate NDMA. NDMA is classified as an extremely hazardous substance, according to the federal Emergency Planning and Community Right-to-Know Act (EPCRA) of 1986. As a result, there are rigorous reporting requirements for any individuals or companies that use, store or produce NDMA in large volumes.

Since 1999, Jed Dietrich, Esq., recognized as an Elite Lawyer of America and a member of the Multi-Million Dollar Advocates Forum, has battled to obtain over $175 Million in verdicts and settlements for people who were seriously injured in Buffalo, New York and beyond. The Dietrich Law Firm P.C.’s team of highly experienced and top rated Buffalo, New York Zantac NDMA contamination cancer injury lawyers will strive to obtain the best possible result for victims with cancer and other illnesses caused by the use of Zantac or other ranitidine medications contaminated with NDMA. Every day, our team is committed to exceeding your expectations and delivering an excellent outcome. Call us today at 716-839-3939 to find out how we can help you! We can be reached 24 hours per day and 7 days per week.

JED DIETRICH, ESQ. AND HIS TEAM OF BUFFALO, NEW YORK ZANTAC NDMA CONTAMINATION INJURY ATTORNEYS ARE HERE TO HELP YOU.

Evidently, NDMA can also be found in some medicines containing ranitidine, like Zantac. Although it is not definitive, some studies suggest that NDMA can be produced as the body metabolizes ranitidine in the stomach, because of the inherent instability of the molecule. Unfortunately, ranitidine medications are not the only drugs with NDMA contamination. In July 2018, the Food and Drug Administration (FDA) issued a voluntary recall of medications containing valsartan, an ingredient used to treat heart failure and high blood pressure, due to NDMA.

NDMA is classified as a B2 carcinogen, which means that it is a probable human carcinogen. According to the World Health Organization (WHO), exposure to large quantities of NDMA is believed to cause colorectal or gastric cancer. The likelihood of developing gastric cancer was approximately 34% greater for people with a high consumption of NDMA. Additionally, NDMA is extremely liver toxic, as even minute quantities can be connected to liver damage.

Valisure, a pharmacy that does its own independent analysis on medications, discovered NDMA levels as high as 3,000 micrograms in Zantac pills, while the acceptable threshold of NDMA consumption is set below 0.1 micrograms. Especially when compared to the mere 17 micrograms of NDMA discovered in blood-pressure medications in 2018, many people are understandably very troubled about the levels of NDMA found in Zantac medications.

If you, or a loved one, have taken Zantac or any generic medications containing ranitidine, and developed cancer as a result, you should contact Jed Dietrich, Esq. and his top rated team of Buffalo, New York ranitidine containing NDMA cancer injury lawyers at the Dietrich Law Firm P.C. to learn more about your legal rights. You may have a legal right to compensation for the cancer or other illnesses that you have suffered, and the losses that you experienced as a result. We are dedicated and determined to get you the best possible result after your illness in Buffalo, New York or throughout New York State. We can be reached 24 hours per day and 7 days per week at 716-839-3939. Call us today!